100 years on: Commemorating the first flight that landed in Singapore 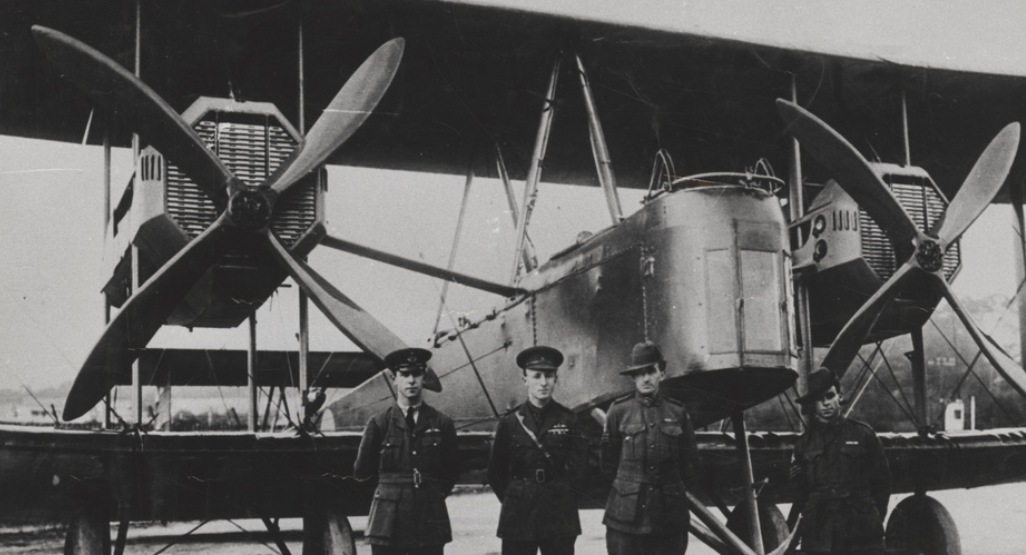 Today, Changi Airport is one of the busiest international airports in the world with more than 65.6 million passengers passing through its gates in 2018.

Each week, about 7,400 flights land or depart from Changi Airport (that’s one every 80 seconds!). With the high air traffic that we see today, it’s almost hard to imagine that it was only 100 years ago, on the 4th of December 1919, that Singapore witnessed its first flight landing. Back then, it wasn’t even on a runway that we welcomed the plane, but an old race course at Farrer Park!

In commemoration of the centennial of that very first flight, we bring you this special feature of Discover Changi that takes you back to the humble beginnings of aviation in Singapore and trace our journey of growth as an international air hub.

The pioneering flight crew of the “God ‘Elp All of Us” featured a sibling duo and their two mechanics. Photo credit: State Library of South Australia

The first plane to land in Singapore was not at Changi, but the old Race Course at Farrer Park. Dubbed the 'God 'Elp All of Us', it was a refurbished Vickers Vimy biplane crewed by four Australians - pilots and sibling duo Ross and Keith Smith; with mechanics James Bennett and Wally Shiers.

Postcard showing crowds flocking towards the Vickers Vimy biplane after it had landed at the old Race Course at Farrer Park – which was a favourite haunt of British settlers. Photo credit: Roots.sg

The flight, which was a race from London to Darwin, was organised by the Australian Government to promote aviation in the country. The first crew to finish the race within 30 consecutive days by the stroke of midnight on 31st December 1920 would win the then princely sum of £10,000.

Sounds pretty straightforward in today’s context, but it was a daunting task with the technology at that time. Of the six teams that entered the race, only two managed to finish it, with two teams suffering tragedy in a plane crash and another two pulling out after experiencing damage to their aircraft.

Despite the tough circumstances of the race, 'God 'Elp All of Us' crossed the finish line 180 days faster than the runner up![1] For the effort that earned them the first place, the Smith brothers were knighted by King George V, while mechanics Bennett and Shiers were commissioned and promoted to the rank of lieutenant.

·       The Smith brothers flew an estimated distance of 17,911 kilometres from London to Darwin, taking off from the Hounslow Heath Aerodrome on 12 November.

·       They arrived in Singapore on 4 December and departed two days later for Darwin, finishing the race in 28 days.

·       With the advancement of aviation technology, a flight from London to Sydney via Singapore on Qantas Airways covers a comparable distance of about 17,000 kilometres in just 22 hours!

An airport of many firsts

It would be more than 10 years after the 1919 flight before Singapore’s first civilian airport at Seletar came into operation. As the demand for air travel grew, Singapore shifted its civilian aircraft operations to other locations at Kallang (which is now defunct) and subsequently, Paya Lebar, before Changi Airport opened its doors 60 years later, on 1 July 1981.

Fast forward to present day, Changi connects Singapore to some 380 cities by over 100 airlines. From flights to ever-popular regional destinations like Tokyo for the quintessential Japanese cultural immersion that every Singaporean enjoys, to less explored destinations such as the mysterious Kingdom of Bhutan, Changi has grown its connectivity to bring passengers to more places. Locals planning their next vacation will be spoiled for choice with increased air travel options and exotic new destinations continously being added.

One of the most iconic views of Bhutan has to be of the Taktsang Monastery, which has a strong religious significance to the Bhutanese.

Many milestones mark the progress of Singapore as an aviation hub and many of these have been witnessed at Changi. With the advancement of aviation technology and the introduction of the ultra-long-range aircraft, our home carrier Singapore Airlines successfully launched the world’s longest non-stop flight covering some 16,700 kilometres from Singapore to Newark  in October 2018. With a well-balanced portfolio of full-service and low-cost carriers operating from Changi Airport, travelling has been made more assessible for all.

From an airport to a global tourist destination

While Changi Airport has focused on operational efficiency and service over the years to bring  passengers greater convenience, it has also sought new ways to present novel travel experiences that delight – redefining Changi as more than an airport, but a destination in its own right.

There are a myriad of unique attractions and installations around the airport such as the landscaping and gardens, countless retail and dining options, amenities and facilities in both the public and transit areas, and some exceptional toilets. More recently, the awe-inspiring nature-meets-retail experience at Jewel Changi Airport have further cemented this status.

Jewel’s magnificent HSBC Rain Vortex, surrounded by lush tropical greenery and urban architecture, has brought to life Singapore's reputation as a “city in a garden”.

Additionally, besides the airport being a tourist destination in itself, Singapore has increasingly become a favourite stopover destination among travellers visiting Southeast Asia or those on route to further destinations on a long-haulflight. A Changi Stopovers programme was introduced last year to entice passengers travelling through Changi Airport to stop over in Singapore and explore this city in a garden, and make the most of their time in the country.

A typical stopover with the programme begins with a minimum 2-day-1-night stay in a hotel of their choosing, inclusive of a SIM card and one-way airport transfer from as little as S$63. By helping to stretch the dollar while adding variety to their trip, the programme is perfect for a wide range of travellers with different needs or budgets.

So much to do, so little time around the island – so plan wisely to get the most out of your stopover.

Your time on the island might be short but it’s bound to be a fulfilling one. Tick off must-sees like the renowned Marina Bay Sands and Gardens by the Bay or take on unique experiences such as a visit to the local markets or go on a walking tour. If you’re a foodie, check out the amazing local food and get to the heart of the food scene with a local foodie. And finally, end your stopover with some thrill or a night out on the town.

Check out the different ways to get around Singapore while on your stopover.

100 years on, Singapore and its airport have advanced rapidly along with developments in the aviation industry. With shorter travel times, thanks to technology, and enhanced connectivity between different destinations, making the most out of your journey is now as important as the destination itself.

Click here to plan your stopover in Singapore with the Changi Stopovers programme. You can also check out a full list of itineraries put together by the Singapore Tourism Board here.