10 songs to transport you around the world

The voice of the street busker that instantly transports you under the bright city lights of Las Vegas. Singalong anthems that you crank up to spur your drive down the open road. The bright, mellow tune of the ukulele that brings back the sensation of the sun and sand on your skin, watching the waves roll in at the beach. Face melting guitar riffs that make you and a hundred other sweaty concert-goers headbang in unison.

Be it the groove, lyrics, melody, or even the song title - some tunes just have the power to invoke memories of trips taken, ignite the desire to explore new destinations, or arouse the impulsiveness to pack up on a whim and take a journey.

Here are some songs about cities to fan the flames of wanderlust with, as we look ahead with fresh hope and fervor for more borders to reopen. Get started with our Spotify playlist:

1. One Night in Bangkok by Murray Head 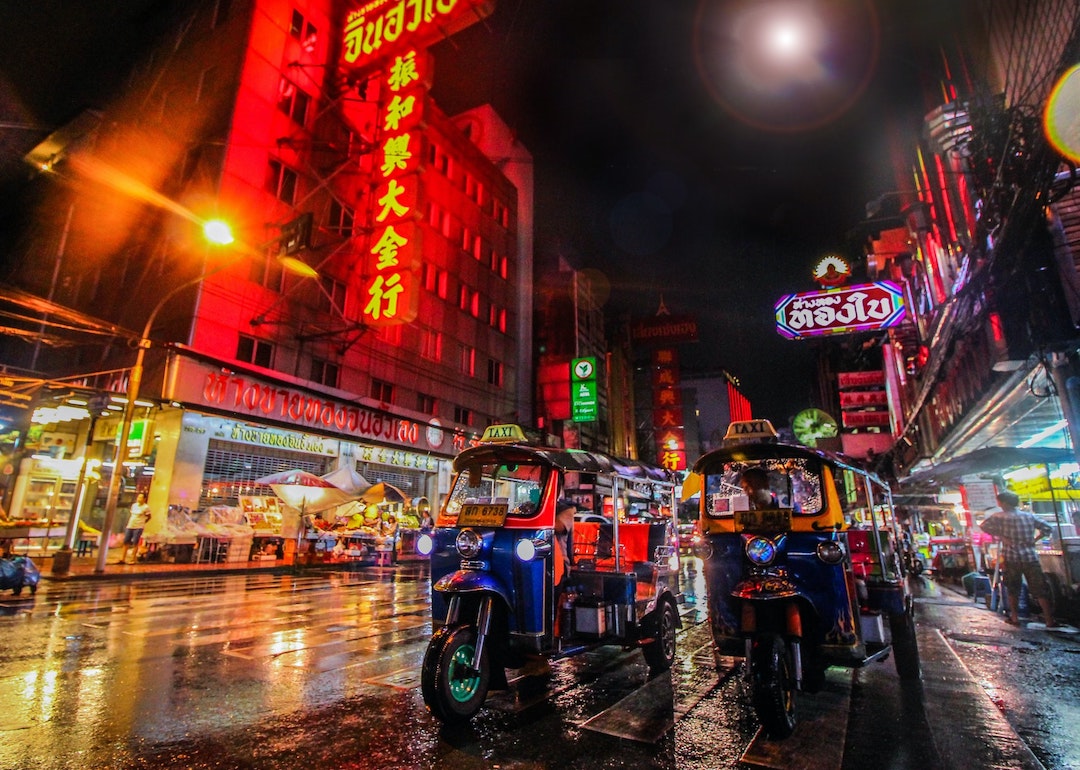 The bustling streets of Bangkok, Thailand is one where tradition-meets-modernity. With a nightlife to beat, this is one of the must-visit places when travelling in Asia.

Though fabulously brought to life by Murray Head, the lesser-known fact about One night in Bangkok is that it was actually penned and produced by Bjorn Ulvaeus and Benny Andersson, the men of Swedish music group ABBA. Mama mia, here they go again - accurately capturing the unique charm of Bangkok by bringing to light the customary quirks and cultural intricacies of this city that never sleeps. But there’s more than meets the eye when it comes to this vibrant city. From being one of the most food-obsessed cities to cosy stores tucked in street corners, these different sides of Bangkok are what make the city the Land of Smiles.

Being only a 2.5-hour flight away, we can’t wait for Asia’s City of Angels to resume its status as a popular weekend shopping haven and backpacking escapade. The good news is, there’s a Vaccinated Travel Lane (VTL) arrangement between Singapore and Thailand! Start packing your virtual bags to this melody.

2. Lost in Japan by Shawn Mendes Sakura lining the Meguro River in Tokyo, Japan, is quite possibly the most beautiful scenery in the world.

Having just graced the sunny shores of Singapore with a concert in October 2019, before the travel freeze, Grammy-nominated Shawn Mendes is an undeniable earworm. In his sentimental Lost in Japan, a Billboard Hot 100 hit, Shawn reminisces about finding romance along the charming alleys in the land of the rising sun. Japan is arguably the most romantic in late March and early April when the cherry blossoms bloom to create one of the most beautiful sceneries in the world. Perfect for those reeling from post-valentine’s day blues.

We hope it won’t be too long for us to Ari-go-to Nippon, Japan in the near future. But before that, soak into her mystique with this ramen-tic tune as you imagine yourself walking the Sakura-lined riverside path with your headphones plugged in.

3. Made in China by Higher Brothers 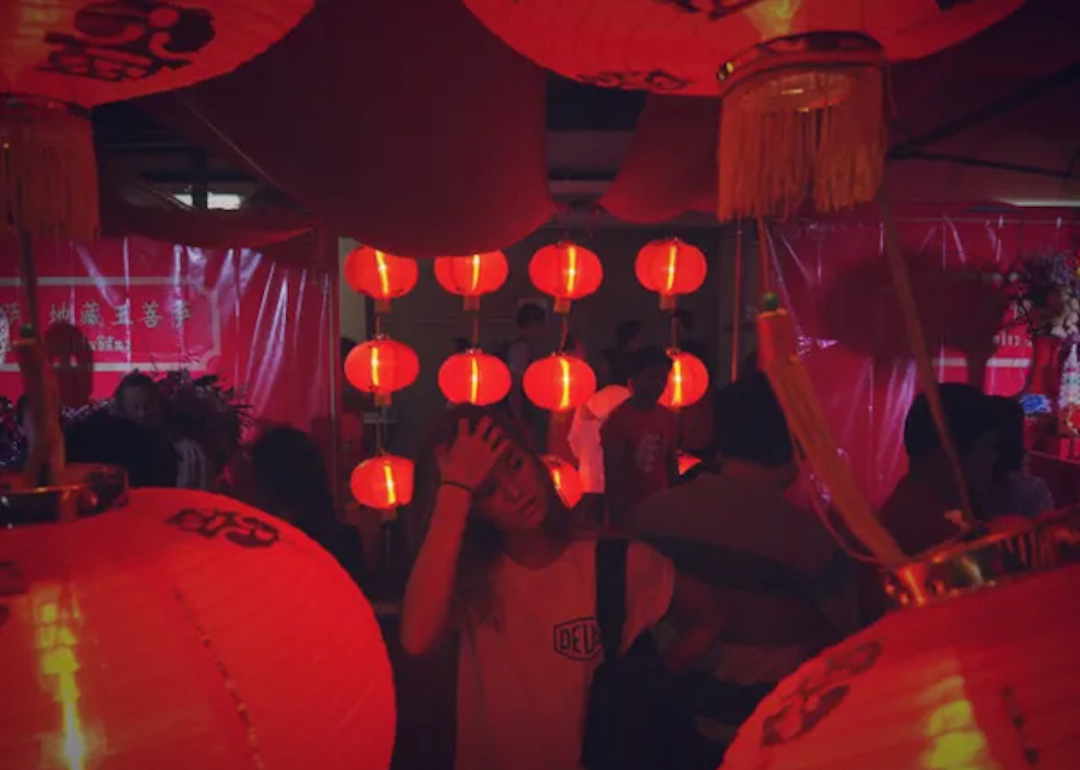 Home to the live music scene and the best bars in town, Chengdu, China, is the place to be for some jam sessions and fun.

Beyond being a hot destination for tourists travelling in Asia and its sea of spicy Sichuan cuisine, Chengdu produced the first Chinese rap act to successfully break into and make waves in the international music scene. The hip hop group Higher Brothers rose to fame in the west with their popular hit song Made in China, and continues to produce songs that celebrate Chinese pop culture, switching between English, Mandarin and drawling Sichuanese dialects. Made in China exemplifies cultural synthesis, serving as a window to the world of vibrant, underground music in China.

Fire up your wanderlust with the beats of hip hop hues on our Spotify playlist from this spice market.

4. On a Little Street in Singapore by Manhattan Transfer 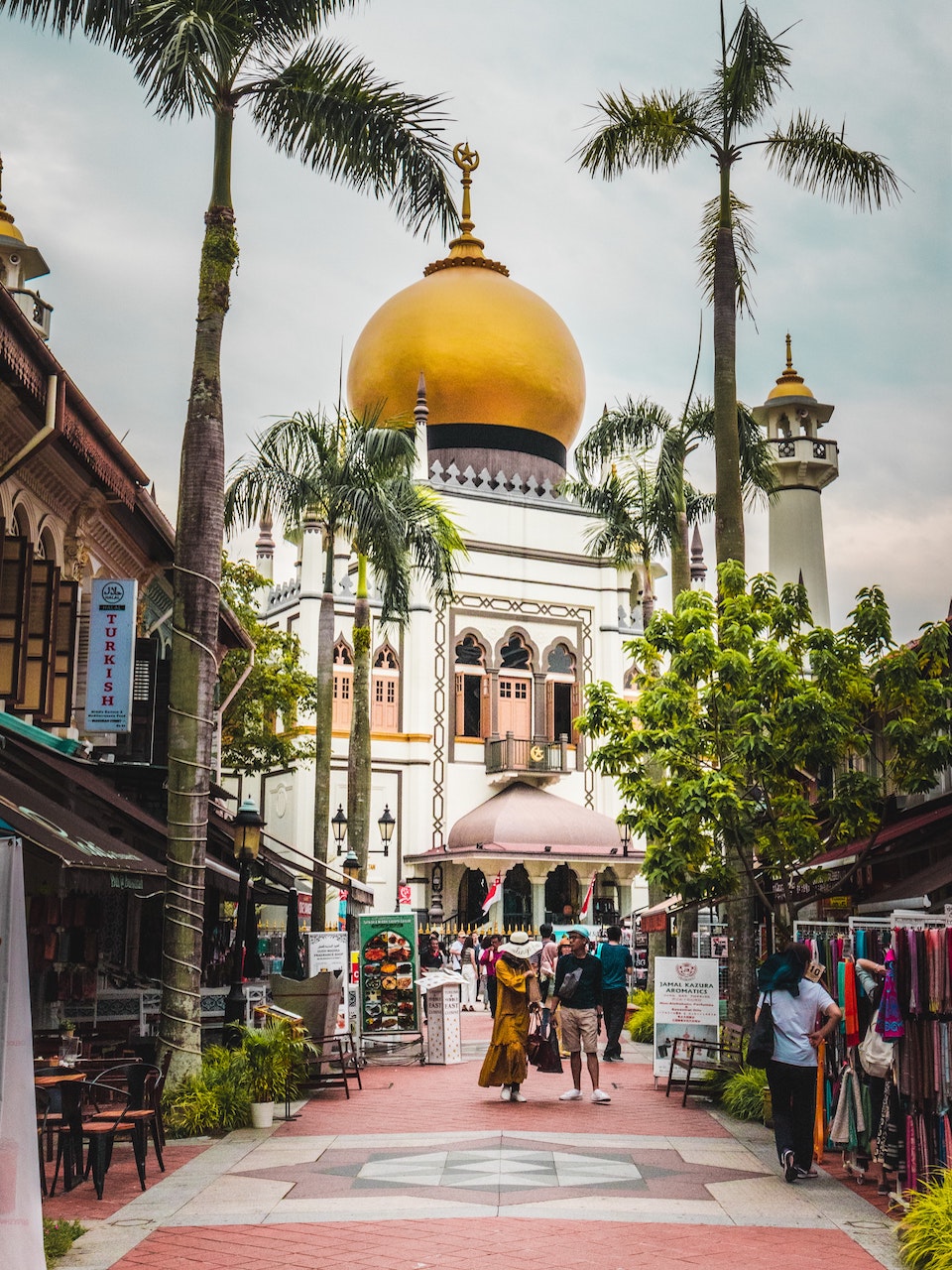 Immerse yourself in the quaint streets of Haji Lane.

We bet you didn’t know there was a song written about Singapore.

Distant from the vibrancy and dynamism of the bustling concrete jungle that Singapore is often depicted to be, this haunting tune from the 1930s ignites a plaintive nostalgia of yesteryears. On a Little Street in Singapore was popularised by vocal group The Manhattan Transfer. Artists who have covered the song include Frank Sinatra, Glenn Miller, and the most recent being Bob Dylan in 2016.

Have a listen, and be inspired to rediscover Singapore’s colonial and cultural districts and our historically rich museums.With several family-friendly places to go with your kids, your getaway to Singapore can easily be a family affair.

5. Made in India by Alisha Chinai Made in India is not just a song about a destination. It is one about a country that celebrates love, joy, and enthusiasm with festivals like Holi.

Picture this - you’re running through a crowd as you partake in one of the most joyful and colourful festivals in Asia, and an iconic tune by the Queen of Indipop plays in the background.

Made In India is one of those earworms you know the tune of, guiltily not knowing the exact words to - but find yourself bobbing relentlessly to anyway. One of the highest selling pop albums of its time, Made in India topped multiple charts in Asia and across the international market. The vivacious melody of this hit song brightly captures the flavours and vibrancy of India.

Tune into the heart of Bollywood with its shimmy tunes, starting with this pop hit. Want to experience all these in person? There’s now a Vaccinated Travel Lane (VTL) arrangement between Singapore and India! Get your hair and makeup done, warm up those hips, get on your dancing shoes, and Chalo! Built in the 1900s, cast your eyes on the recognisable rough-hewn structure of Casa Mila in Barcelona, Spain

Beyond its ballistic contribution to football by housing the largest football stadium in Europe, this city in Spain sprouts in diversity. It boasts nine UNESCO-protected monuments, more than 20 Michelin-starred restaurants, and over 55 museums. George Ezra’s Barcelona oozes with inspiration for anyone to visit this charming city which is home to some of the most beautiful places in the world. It doesn’t, however, account for the San Francisco-like streets, with its rolling hills and slopes.

Put on your comfortable shoes, and start dancing to the sounds of the city of Barcelona. 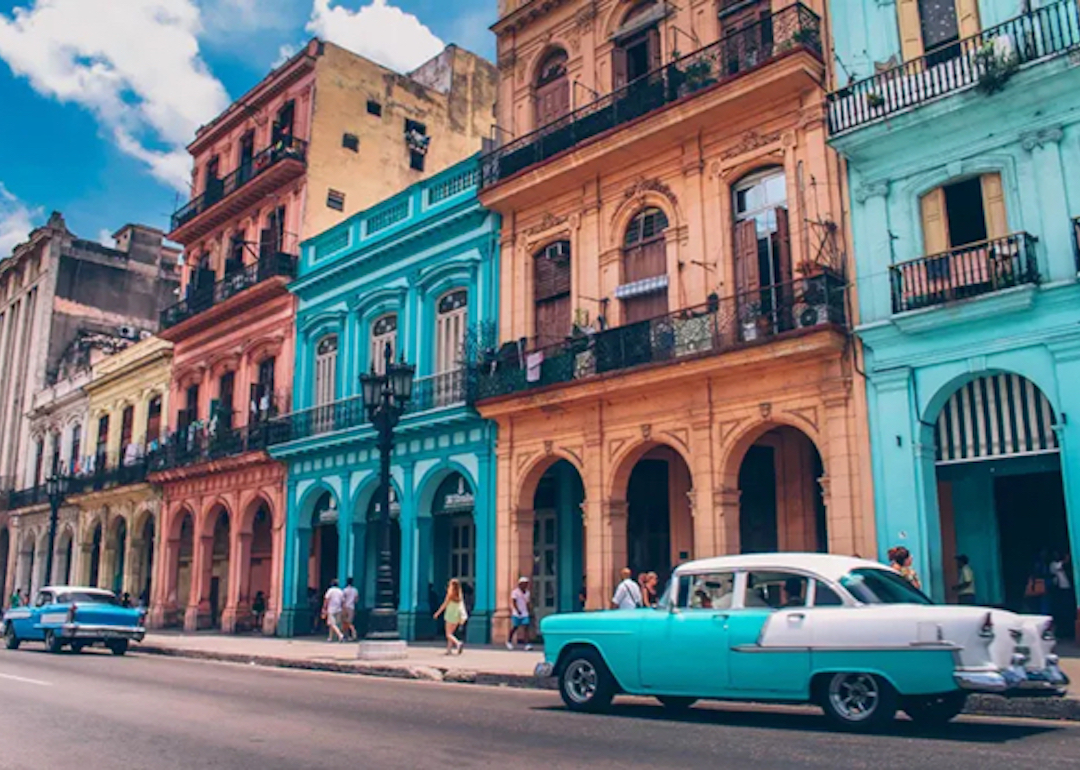 Old Havana is revered for its scenic beauty, making it a neighbourhood for all to visit when in the capital of Cuba

After the rich historical journey through Barcelona, let’s actually go back in time, to Havana, Cuba, a bustling city preserved in the 1970s (Sepia filter not included). Dance to the mambo beats through the streets. Try not to get knocked down by a flawlessly preserved classic American muscle car driven by Vin Diesel, or any of the other hundreds of classic car taxis dotting the aforementioned streets.

Leaving the movie reference behind, we come to Havana, by Camila Cabello. Making history as one of the most streamed and played songs on Spotify back in 2018, this was Camila’s first Billboard Hot 100 #1 hit. This song is the epitome of Havana - a land filled with rich musical culture that birthed the tunes of mambo and salsa (think of the movie Dirty Dancing), tropical fruits, vibrant beaches and colourful fascinating architecture, you can’t rum away from her charm.

Start to rum-ble and mambo jumbo to grooves of Havana-oooh-nana’s sandy beaches. 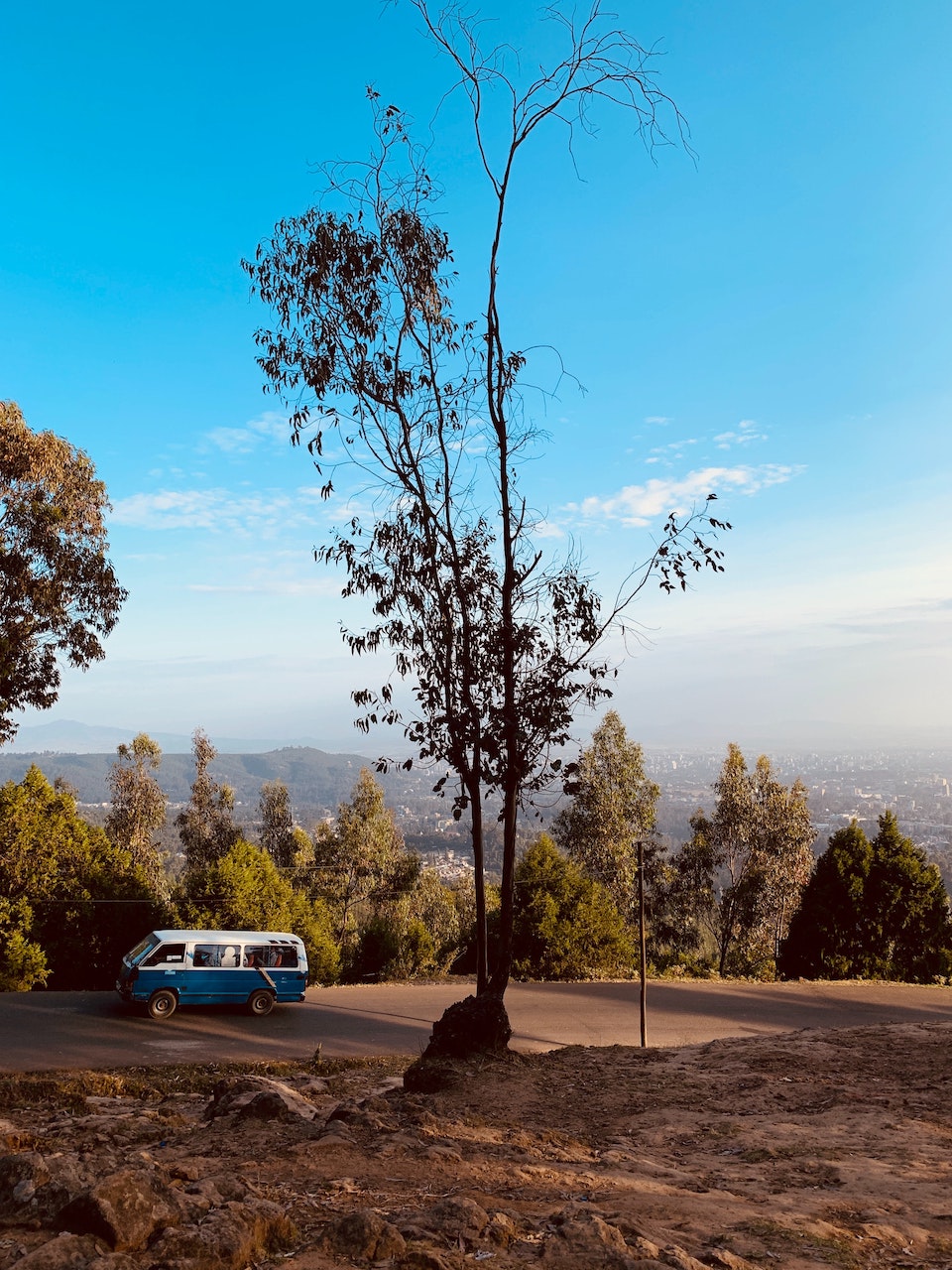 The magical destinations of Ethiopia, Africa can be explored the ubiquitous blue-and-white minivan (aka “blue donkey”)

This ode to Africa by Toto is the unofficial anthem of karaoke bars, beloved by hipsters and baby boomers alike, belting along to the chorus with “I bless the rains down in Africa!”. Don’t let that distract you from the true heartbeat of the song. Close your eyes. Picture yourself in what you think is Africa. Do you see the great grasslands, full of wild beasts and untamed potential? Do you hear the drums echoing tonight? Of course you did. Time to live out your wildest jungle book dream.

Weeoh aweem away to the beat of your own drum in Africa! New York City has more songs dropped about her than the number of times the Times Square Ball has dropped on New Year’s Eve. Owning the title of being the city that has been sung about the most, here’s the song that encapsulates the classy charm of its history, while bringing to life the cosmopolitan promise of the American dream.

Often dubbed as a paean to the American Dream, New York, New York colours the Big Apple with aspiration through the hopeful eyes of a newcomer. Contrary to popular belief, New York, New York was actually written for and first performed by Liza Minnelli in the 1977 film of the same title. The re-recording of the song by Frank Sintara three years later was the springboard that propelled it to stardom, making it one of the most recognised and popular songs known to millions around the world. A true testament to its timelessness, New York, New York continues to make (air)waves with covers by many other big names like Michael Bolton, Queen and most recently, Lady Gaga. Now, don’t you want to wake up in the city that never sleeps?

Take a big bite out of the big apple in the grandeur of New York, New York with the Vaccinated Travel Lane (VTL) arrangement between Singapore and USA! One of London’s most famed landmarks, the Big Ben is a must-see attractions to go visit with the kids.

Take me back to [insert your dream destination here] has been a mood for most of us over the past two years.

Featured on Ed Sheeran’s No. 6 Collaborations Project (2019), this is a rap-song, celebrating the duo’s love for London, and their desire to return to where they call home. Ed Sheeran sings (raps?) about wanting to “hit friends up” and “go straight to the pub” especially after having “travelled a million miles”; while Stormzy (hip) hops into rapping about his hometown Croydon in the south of London and his homies, who he naturally refers to as the South London boys. The duo converge in the final verse with references to Brit pop culture, concluding that “no town does it quite like my home”. And where London is concerned, I couldn’t agree more.

With the Vaccinated Travel Lane (VTL) arrangement between Singapore and the United Kingdom, you can now also “jet-plane headed up to the sky” and “spread wings in the clouds, getting high”.

Whichever genre fuels your engine, let music transport you to your favourite destinations. Hit the play button on your free Spotify or premium account now!

What are some of your favourite songs that inspire you to travel? Tell us about them in the comments below!