6 historic theatres you must visit in Broadway and beyond

Broadway is often used as shorthand for theatre, but it’s also the name of the famous arts district in New York. For actors, it is a status symbol, and for the audience, it is an opportunity to connect with the actors and the art form.

Here are six theatres around the world where you can immerse yourself in the latest musicals and stage productions! A scene of Wicked being performed at Gershwin Theatre.

The Gershwin Theatre opened in 1972. It’s also home to the musical smash hit ‘Wicked’. Past shows staged at the venue include ‘Oklahoma!’, “Tango Argentino” and “Peter Pan”, just to give you a brief idea of its vast legacy.

The theatre was designed by Ralph Alswang and named in honour of one of America’s greatest composers and lyricists—George and Ira Gershwin. Gershwin is also the largest Broadway theatre in New York City, with a seating capacity of 1,933 to boast of.

The theatre’s rotunda – its grand circular dome – was also designed to showcase the names and photographs of Broadway’s own Theater Hall of Fame, which is a touching way to immortalise its Broadway legends.

Its longest running show is ‘Wicked’, but that might change in time. So be sure to catch Glinda and Elphaba in action if you’re in the vicinity! You may purchase tickets for ‘Wicked’ online or at the Gershwin Theatre box office. 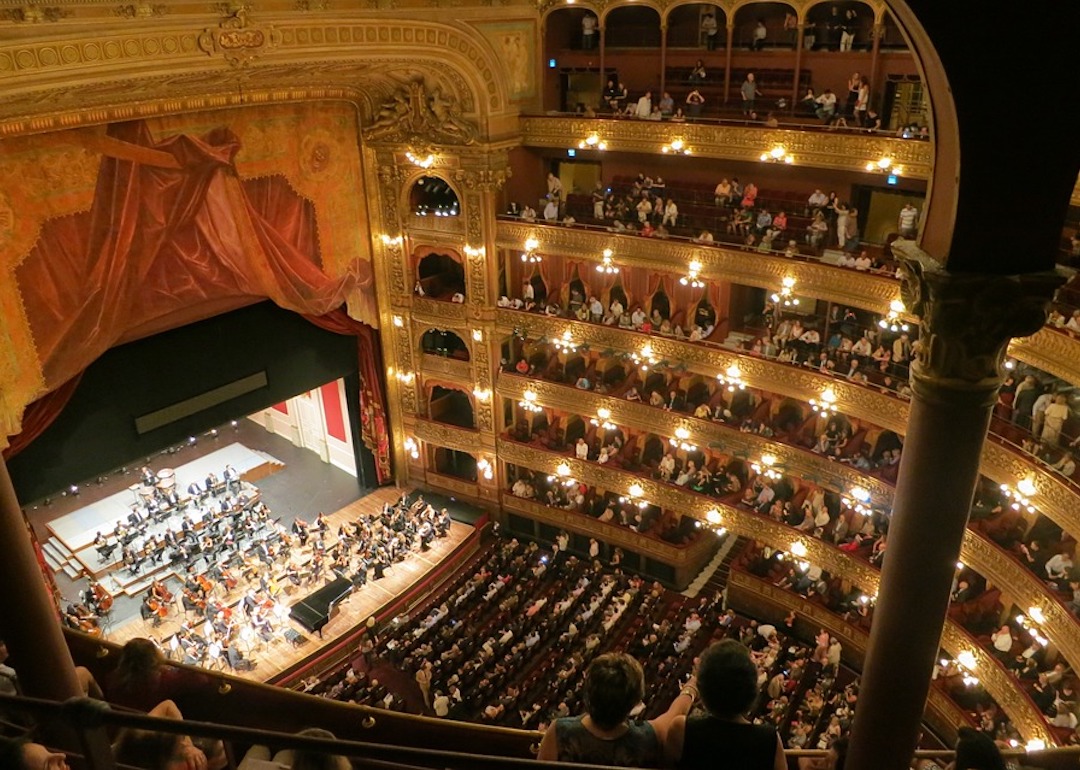 A classical music concert in the grand and majestic Teatro Colón.

Teatro Colón is a gorgeous 19th century theatre and a landmark in Latin America. The rich history tied to the theatre makes it one of the most important opera houses of the world.

The theatre sits on the street of Avenida Corrientes (Corrientes Avenue in English) - one of the main streets in Buenos Aires. It’s a “street that never sleeps” and as the name suggests, on top of the theatre, visitors can also expect exhilarating nightlife.

Teatro Colón has hosted many orchestras, ballets and choirs and is considered to have some of the best acoustics in the world.

Teatro Colon once showed Evita, a musical about the life of Argentine political leader Eva Perón, by Andrew Lloyd Webber and Tim Rice.

For those interested in architectural history, attend the guided tour to learn the history of the theatre. Through the tour, you’ll get to view the stunning interior, dressing rooms and costume department!

Ticket prices to a performance at Teatro Colon can range from 70 to 200 USD (S$100-S$286 USD). Don’t worry if you can’t speak Spanish or Italian, the opera, ballet and orchestral concerts speak art and is a once-in-a-lifetime experience. 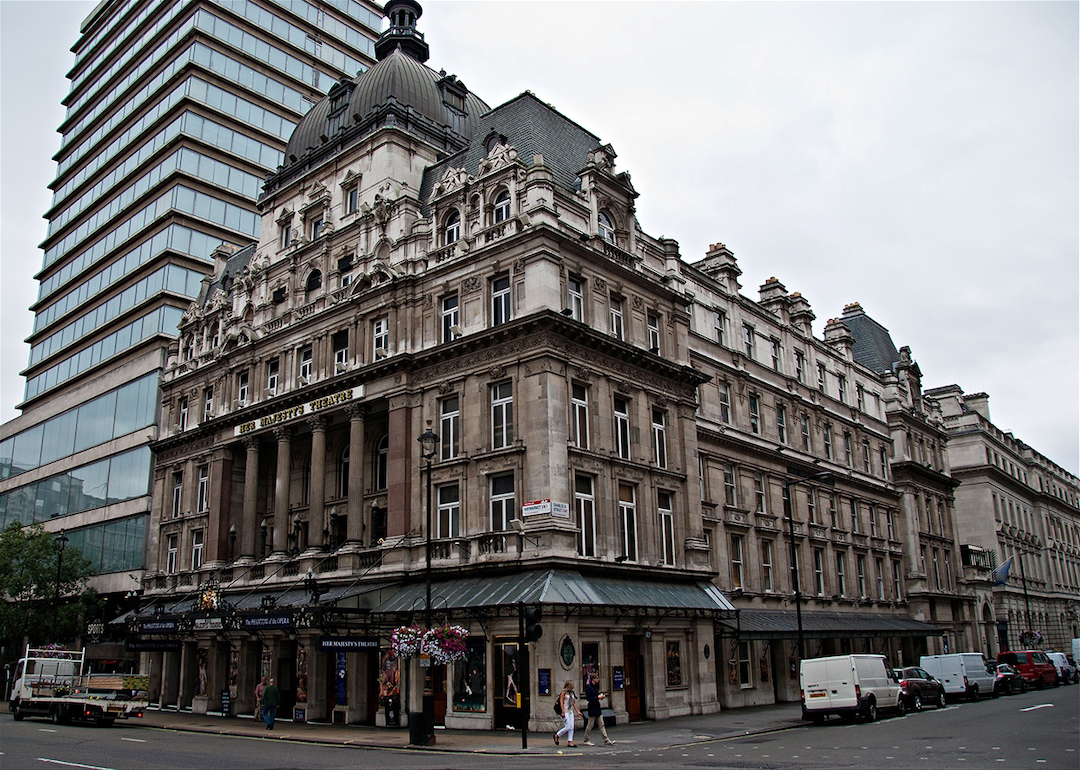 Exterior of Her Majesty's Theatre.

This 125-year-old theatre on London’s West End changes its name in accordance with the gender of the British monarch.

When someone mentions “Broadway”, Andrew Lloyd Weber’s 1986 “The Phantom of the Opera” comes to mind – and what list would be complete without mentioning Her Majesty’s Theatre, home to the famed musical.

The majestic theatre is a must-see attraction. It has more than 1200 seats across four levels. When lit, the exterior of the structure takes on a gothic sheen, with beautiful columns adorning the front entrance. The interior is also a sight to behold – its dome-shaped ceiling and red seats really contribute to the atmosphere. Just one look and we’re feeling cultured already.

‘The Phantom of the Opera’ is still being performed, making it the longest running and most successful production in the theatre’s history. However, they are scheduled to close in February 2023, so catch the show while you can. Tickets can be purchased here from £22 (S$35). The Royal Alexandra Theatre is a national historical site of Canada.

Popularly known as the Royal Alex, the Royal Alexandra Theatre is the largest English-language theatre outside of London and New York City.

Built in 1907, it is the oldest continuously operating legitimate theatre and was the first air-conditioned building in North America. How cool is that?

The Royal Alexandra Theatre plays a significant role in shaping the Toronto entertainment district. A masterpiece of beaux-arts architecture, it has been the home to almost 3400 productions since its opening in 1907 including the “The Shark is Broken”, which has been nominated for Best Comedy Play at the 2022 Olivier Awards. Front view of the Noh stage in the National Noh Theatre.

Presumably the oldest form of Japanese theatrical art that began in the 14th century, Noh incorporates music, dance, and drama to portray themes surrounding religious, spiritual and even supernatural beliefs.

Performers in rich and heavy costumes would recite or sing in poetic language and monotonous tone in Noh. In general, people watch Noh for its storytelling. Stories from Noh performances are usually drawn from traditional folklore, history, literature and contemporary events.

A typical noh programme lasts several hours, consisting of two or three acts, with short traditional theatre (Kyogen) pieces in between. Visitors can also catch shorter performances on certain days if they are scarce on time.

Noh is still popularly performed in private and public theatres, and even shrines and temples across Japan. Nevertheless, the National Noh Theatre, opened in 1983 and run by the Japan Arts Council, is probably one of the few places that perform Noh with English subtitles.

Over here, visitors not only can discover more about Noh and Kyogen. They can also have a close look at some of the hand-made costumes, masks, and other Japanese artistry that were passed down from generation to generation in the exhibition room.

The National Noh Theatre is within walking distance from the Sendagaya Station on the JR Chuo and Sobu lines.

Athens is the birthplace of Western theatre. The origins of Greek theatre date back to 6th century B.C.. It began with festivals in Athens honouring the Greek god, Dionysus and hoping to unite the people of Athens.

Many Greek stages are old amphitheatres that converge Greece's past and present as ancient stages serve as the backdrop.

The open-air Lycabettus Theatre is set atop a hill overlooking the Parthenon, the city’s symbol of democracy – how poetic is that? The theatre is not only a venue for ancient drama but also contemporary concerts. Artists and bands like Vanessa Mae, Bob Dylan, Radiohead, and many more had once performed in this 3000-seat theatre.

Lycabettus Theatre was closed in 2008 for safety reasons but it has just made a comeback this summer after a planned makeover. Whether you are a cultural enthusiast or not, this place still makes for a fantastic tourist destination.

How to get there: While steep, it’s possible to walk up the Lycabettus Hill to where the theatre is. The walk may last about 30 to 90 minutes depending on personal fitness. It’s recommended to walk early in the morning or late in the evening to avoid the heat.

A more convenient option to head up Lycabettus Hill is via the Teleferik or the cable car. The ride, which begins at the junction of Aristippou and Plutarchiou Streets, is 3-minute long. It costs €7 (S$9.90) for a round trip and €5 (S$7) for a one way ride.

Theatre performances cross language and cultural barriers, making it a visual language that anyone can understand. Whether you’re looking for Broadway classics or smaller productions, these different theatres from the world will guarantee a truly memorable experience!

Shop before you fly!
Shop 30 days in advance and up to 12 hours before your flight in the comfort of your own home. Plus, enjoy tax- and duty-free prices and online-exclusive offers. Shop now at iShopChangi!

Be rewarded when you shop at Changi!
Leap into a world of exclusive privileges as a Changi Rewards member. Enjoy GST-absorption for your purchases at participating outlets in the public areas of the airport and more. Sign up for the FREE membership here.