While most people seem to post the same “been there, done that” holidays, here’s your chance to experience the unexpected: Uzbekistan.

Apart from knowing it’s one of the ‘Stans (which also includes Tajikistan, Kazakhstan, and Kyrgyzstan) in Central Asia - few people have an idea where or what Uzbekistan is.

But that’s the charm of it: a whole country just waiting to be discovered – and it’s almost guaranteed you’ll be one of the first to do so! 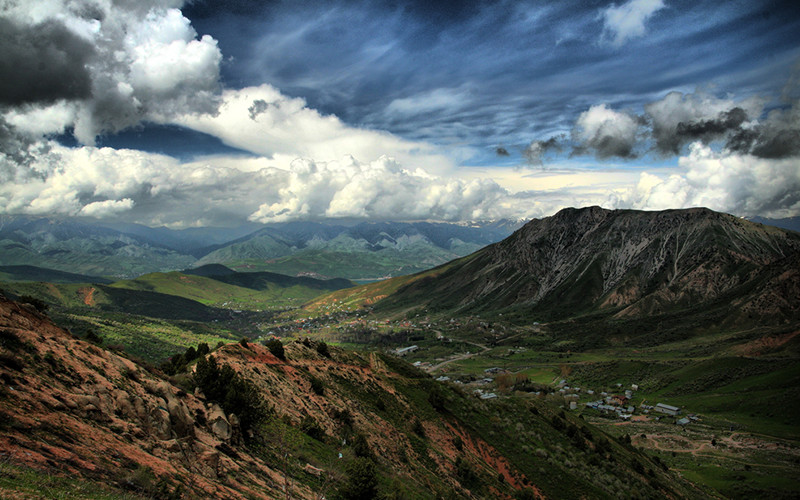 Uzbekistan was once part of the ancient Silk Road, the international route through which traders of silk and other precious goods travelled between Asia and Europe. Because of this multicultural traffic across millennia, Uzbekistan has a rich, colourful heritage. Many of its architectural wonders and ancient traditions have survived earthquakes, wars, conquerors, and even the Soviet occupation.

Apart from its booming capital Tashkent, Uzbekistan boasts cities as ancient as Rome and Athens – that are not as overcrowded with tourists. It’s even home to 4 UNESCO Heritage Sites. The largest intact walled city in Central Asia, Itchan Kala is magical - like the set of Disney’s Aladdin come to life. Today, thousands of people keep this magic alive, living as if millennia haven’t passed, many of them working as silk and carpet weavers within Itchan Kala. There are almost 300 monuments and mini-museums, and it’s possible to own one of the 250 historic homes – if you marry a local. 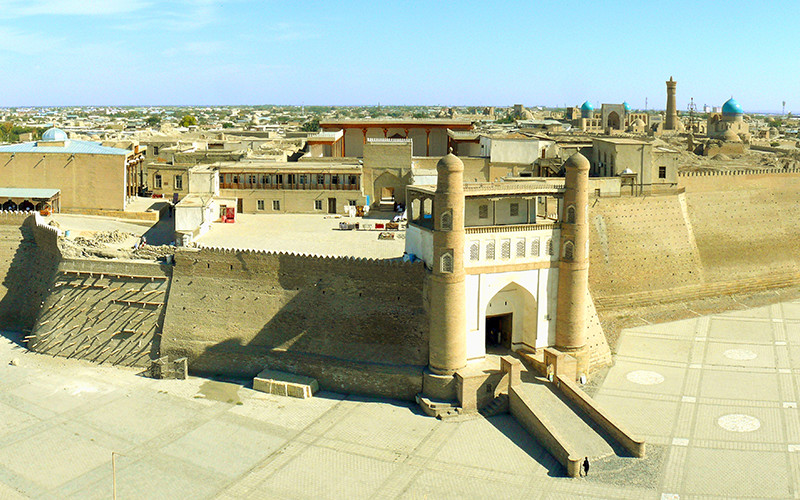 The Ark Fortress in Bukhara, built around the 5th century. Photo credit: <a href="http://tourstouzbekistan.uz/en/" target="_blank">EcoTour Uzbekistan</a>

About 2,500 years old, Bukhara is also known as the city museum. It has over 140 monuments - including medressas (educational institutions), minarets (towers that are usually part of a mosque), and a massive royal fortress called the Ark.

Constantly invaded and destroyed by would-be conquerors and plunderers, the Ark was restored many times since it was first built in the 5th century. Legend has it that Alim Khan, the last Emir to rule Uzbekistan from 1910-1920, ordered the destruction of the Ark, so that the invading Bolsheviks could not access its secret places, including the harem. Thankfully for visitors today, the order wasn’t implemented successfully – and an impressive portion of the Ark remains intact for you to explore.

3.    The Historic Centre of Shakhrisabz

Shakhrisabz is most famous for the Ak-Saray Palace commissioned by Uzbekistan’s greatest ruler, Timur (known to the West as Tamerlane). One legend speaks of the craftsmanship that went into the building of this palace: Timur was rushing the completion of the decorative façade, but the chief architect suddenly disappeared. No one with the same skill could be found, so the building wasn’t finished – until the architect eventually resurfaced. He explained he was afraid to disobey Timur, but knew the finishing touches couldn’t be done until the building had settled; otherwise, the decoration would just collapse and be destroyed. Today, only the palace’s pillars and part of the arch of its main portal remain, but other exceptional monuments have survived to earn Shakhrisabz its UNESCO Heritage Site status.

Over 2,500 years old, Samarkand has inspired poets such as Keats, Oscar Wilde and the Persian Hafiz (also known as Hafez). After Samarkand was destroyed by conqueror Genghis Khan in the 13th century, Uzbekistan’s ruler Timur restored it, using artisans from the cities he conquered: sculptors and stone workers from Azerbaijan, Isfahan and Delhi; mosaic artists from Shiraz; and weavers, potters, and glass-blowers from Damascus.

If you needed to stash art away from the officials who prohibited them, you’d choose the desert in Nukus (about 3-4 hours’ drive from Khiva). And that’s exactly where renegade art collector Igor Savitsky placed the approximately 50,000 paintings he saved, after they were banned by the Soviet Union. Named after him, the Savitsky Museum (also called the Karakalpakstan State Museum of Art or the Nukus Museum) now houses the world’s second largest collection of Russian avant-garde art.

Everyone wants a special wedding, but in Samarkand and Bukhara, they’ve been doing the extraordinary for thousands of years. In the ancient Midnight Fire Wedding Ritual, the groom carries his bride over his shoulders and walks around a fire with her three times. A great Instagram opportunity if you have the chance! 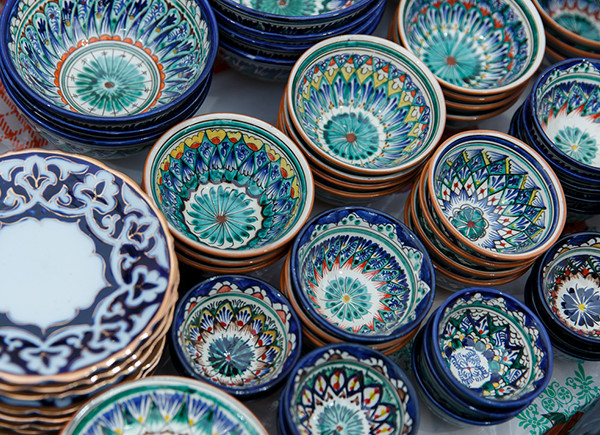 During the reign of Timur and his descendants, the arts and sciences flourished in a period known as the Timurid Renaissance. Throughout this golden age, the world’s best ceramic makers, artists and architects were brought to Uzbekistan and ordered to beautify Samarkand, Khiva, Shakhrisabz and Bukhara. The result? Some of the world’s finest murals and mosaics, with mostly Persian influences and materials – which you can still see in many Uzbek monuments today.

Want to bring samples of such artistry home? Handmade ceramics, including blue and white Uzbek pottery, go for as low as S$1.50.

Adventures in the mountains, on the back of a camel and more

Spend the night in the mountains or in the desert -  not in the usual B&B, but in a yurt, a traditional round tent. Then sit by the fire under the stars, listening to folk music, just like nomads have done for thousands of years. Or retrace the steps of ancient merchants as you ride a camel along the Silk Road cities. Then hike through mountains and explore villages that have been around since the time of Alexander the Great and Genghis Khan – or perhaps even before that.

And best of all, no need to Photoshop the crowds!

Yes, the usual busloads of flashy, noisy tourists haven’t discovered the charms of Uzbekistan yet...so you’ll not only beat them to it, you’ll have many of the sights and attractions to yourself!

Your chance to say you were there first

In a world of tourist traps and “same old same old” experiences, Uzbekistan is an unusual, and underrated destination just waiting to be explored.

With 2 weekly services from Singapore Changi Airport to Tashkent, Uzbekistan’s capital, on Uzbekistan Airways, there are enough ways – and even more reasons – to get there before the crowds.

Spring (April to May) and autumn (September to October) to avoid scorching summer heat and freezing winter cold.

There are many colourful Uzbek festivals but one of the most notable and cheerful is Navruz. Celebrated on 21 March, Navruz is also called Persian New Year, having originated from Persia (now Iran), but it has been celebrated in Uzbekistan for centuries. Like many springtime festivals, it’s a feast of hope and renewal...and a great time to try Uzbek cuisine.

The capital Tashkent has its own metro and public transport system.

Around the other towns and cities, you can take a public bus/mini-van. Buses tend to be rather slow, however, and don’t leave on time. Shared taxis (4 pax/taxi) are faster and more reliable. If you like, you can also have the taxi to yourself (around S$80 a day, excluding petrol).

There are different classes of trains (from express to Soviet-era relics) to take you from city to city. Though given the vast distances between cities, it may be best to book a flight, especially if you don’t have the time.

Bring USD instead of SGD or Euros though. USD is easier to exchange than Euros, while other currencies are not even accepted except in larger Tashkent banks.

There are select ATMs in Tashkent but they may not always have cash. MasterCard and Visa Card holders can make cash advances in banks in the provinces. Travellers’ cheques are also accepted in the National Bank of Uzbekistan.

Changi Airport is linked to Uzbekistan via Uzbekistan Airways’ 2x weekly services between Tashkent (capital of Uzbekistan) and Singapore. Book your tickets to this wonderful country now.