For centuries, Londoners have escaped the city’s grey weather for a weekend of sun, sea and sizzle in Brighton, which is just an hour’s ride by train. Today, Brighton is more than just a side trip for sun-starved city dwellers as it stamps itself on the international map as United Kingdom’s most popular beachfront getaway for international tourists.

An eclectic mix of London hip and SoHo avant-garde (of the Big Apple variety, that is), Brighton one-ups the English capital and other top UK tourist destinations with its exclusive offer of an eight-mile stretch of pebbly seaside enclaves – stomping grounds for mostly affluent free spirits out for a taste of this coastal haven’s eccentric diversity, flamboyant counter-culture and indie landscape.

A colourful, hedonistic past 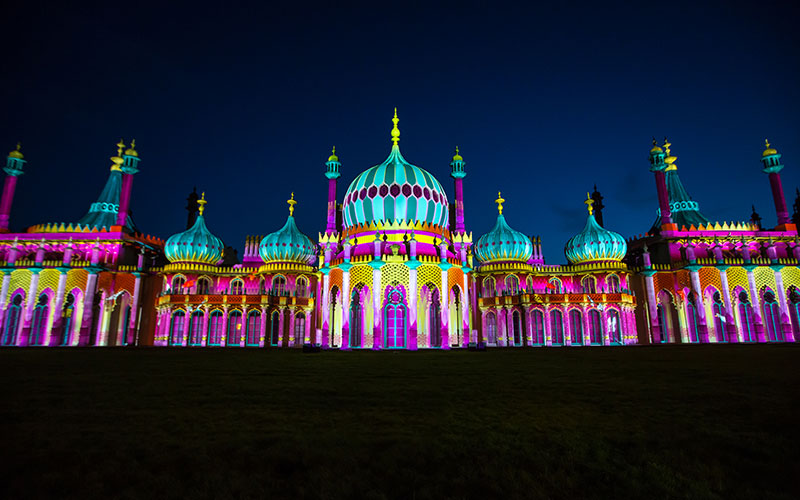 A most un-English town, Brighton revels in its reputation as an antithesis to London. Think a warmer, weirder, wilder alternative.

The Royal Pavilion – an eye-popping 19th-century pleasure palace of Indo-Islamic architecture with opulent Oriental interiors – was built for the Prince of Wales aka Brighton’s “Patron Sinner” (later King George IV) as his secret love nest-slash-kinky funhouse-slash-royal retreat from Regency London.

For locals, this seaside decadence – that is most definitely not a mosque – kick-started Brighton’s rise as the bohemian coastal antidote to London’s megacity slick. 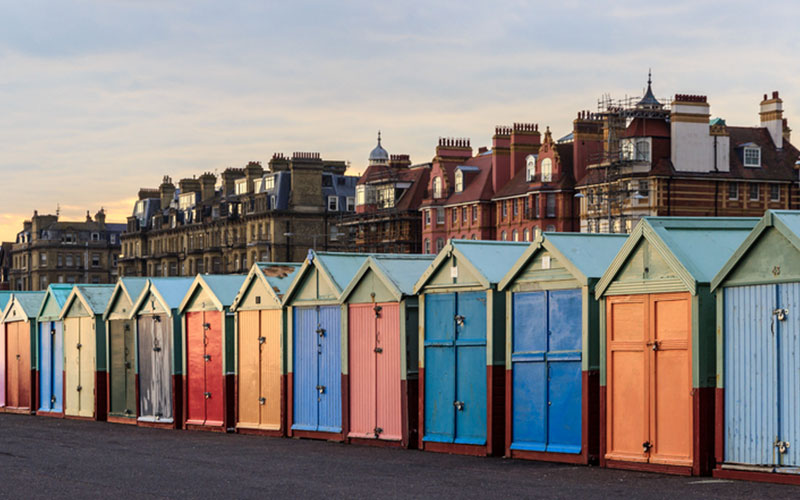 Colourful rows of beach huts in genteel Hove, a town merged with the more bohemian Brighton in 1997 to form the unified city of Brighton and Hove.

●     Brighton exudes an air of goofball eccentricity, so don’t you bat an eyelid when a naked cyclist whizzes past and say hello to that bloke in a pretty frock. But there are three things locals and guests alike do take seriously when in Brighton:

o      Stroll along the refurbished boardwalk of the iconic Palace Pier, the fourth most popular free UK attraction, and the most visited tourist spot outside London. Speed demons and kids-at-heart will enjoy its Turbo Coaster and four-storey arcade. Load up on pennies! o      Glide up to the skies via British Airways i360. No, it’s not a plane. It’s the world’s tallest moving observation tower, higher even than the London Eye. At 138 metres high, you can see as far as the Isle of Wight on a clear day. Closed in 1975, the lonely, hazardous ruins of the century-and-a-half-old West Pier, formerly home to a premier concert hall, is now off-limits to the public.

o      Instagram the century-and-a-half-old West Pier – well, what remains of the twice-burnt derelict – before the sea fully takes it back. A Grade I listed edifice, its eerie beauty has an inexplicable soothing effect. The “Golden Gallopers” carousel, a popular seafront attraction on Brighton Beach, is on display from Easter to September every year, rain or shine. (Photo credit: <a href="http://www.visitbrighton.com/" target="_blank">Visit Brighton</a>)

●     Going on a food trip. Let London have its gourmet fads. Brighton’s food scene is locally sourced, largely organic – it’s practically a vegan’s paradise! – affordable, and globally diverse. In fact, we dare you to eat your way around the world in 24 hours. Kick -off your food trip with these filling options: 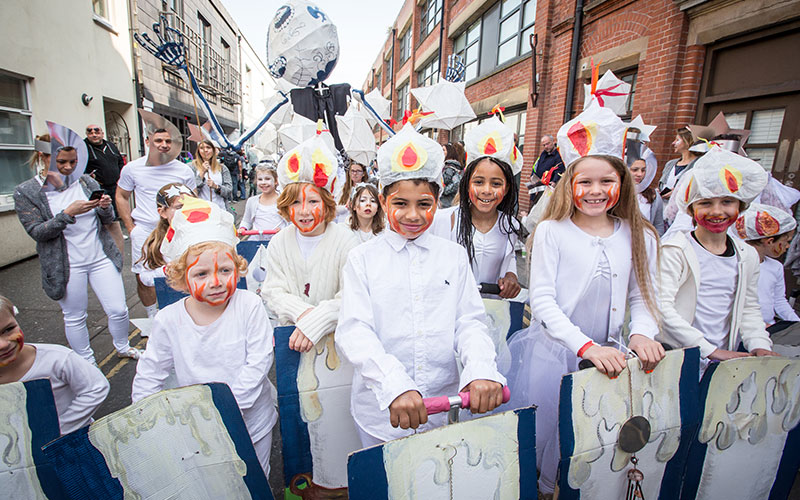 Brightonian quirk start at an early age with events such as Brighton Festival’s Children’s Parade.

o      Over at Rottingdean High Street, Sea Spray Café and its friendly staff are a beachfront favourite for their famous home brew – many come back just for their cuppa! – gluten-free brunch choices, imaginative salads and organic ice cream. ●     Shopping in The Lanes and North Laine. Home to one-of-a-kind indie outlets, kitsch boutiques and antique shops, shopping – or just plain window shopping – in the heart of Brighton’s alternative scene is an essential to-do. Save trips to the big stores for London. In this madcap town, treat yourself to quirky and exotic finds.

o      Choccywoccydoodah is a chocoholic’s paradise founded in Brighton, where its Mothership remains. We dare sweet tooths to finish a ChoccywoccyRockyRoad Lolly in one go.

o      Start your peculiar collection of taxidermy puppets made of dried flowers, shells and bones at Trinkets & Treasure, take green steps in “meat-less” footwear over at Vegetarian Shoes, and make like a real Brit in toasty handmade millinery from Mad Hatters. 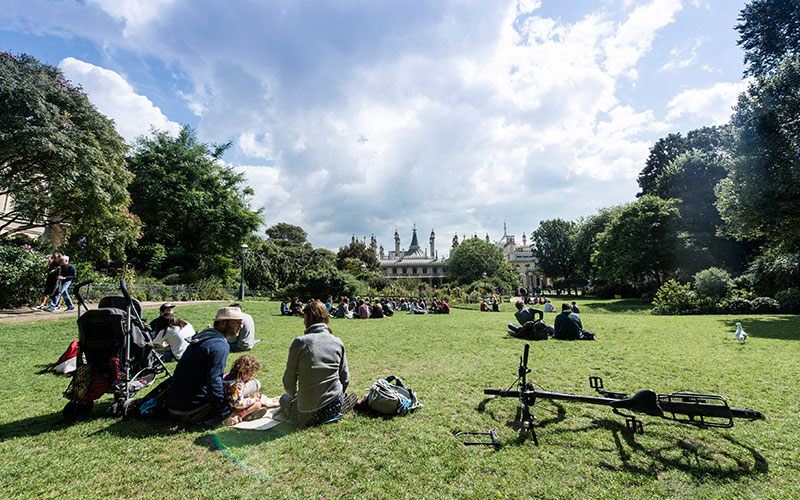 Tourists enjoying a sunny day out on the greens of the Royal Pavilion Gardens. (Photo credit: <a href="http://www.visitbrighton.com/" target="_blank">Visit Brighton</a>)

o      When done browsing for vintage bric-a-brac in Snooper’s Paradise, take a breather at the Pavilion Gardens before a spontaneous night out. Why not start with a first-class, retro burlesque show at Proud Cabaret Brighton and step back in time in your finest regalia? The Lanes district is well-known for its graffiti walls and street art, like this wall mural of rock icons that includes a replica of Banksy’s “Kissing Policemen”. (Photo credit: <a href="http://www.visitbrighton.com/" target="_blank">Visit Brighton</a>)

If London is the formal cultural capital of the world, Brighton must be its cooler, hip, more experimental lil’ brother. Every May, visitors go on a crazy arty bender with one of Europe’s most celebrated arts fetes. Brighton Festival is a massive, three-week long celebration of music, theatre, dance, circus, film, literature, debate, and so on, where only the most avant-garde artists are invited… and kids are most definitely welcome. The annual Brighton Pride Festival held every August. This massive “Carnival of Diversity” consists of a star-studded concert, a rainbow parade, and saucy garden parties that include family picnics and a pampering dog show. (Photo credit: <a href="http://www.visitbrighton.com/" target="_blank">Visit Brighton</a>)

A city unafraid to express itself, check-in with an open attitude in August for the two-day Brighton Pride extravaganza that starts with a huge, colourful parade and ends with a 100-thousand-strong street rave.

Can’t make it to the big festivals? No worries, there’s always an artsy event shaking up Brighton:

●     The Brighton Film Party Society's themed gatherings have staged a Pro Wrestling Party, a Wes Anderson Party, a Blade Runner party. This year, guests get their Quentin on as it’s all about Tarantino.

●     The Drawing Circus holds sketching workshops with the Drawchestra (models who pose and perform music – yes, at the same time) and travels with The Cabinet of Wonder, a gypsy-caravan-movable stage.

●     Stunning and original graffiti art (some of UK’s best!) around town, including a Banksy. Okay, the original of “Kissing Policemen” has been sold but a replica of it remains.

All it takes is an immersive weekend trip to Brighton to discover why it’s called “the hippest city” and “happiest place to live” in the UK. With its daring beaches, cheeky quirks and free spirit, this express beachfront getaway will open your eyes to a whole different side of the UK.

May to August to make the most of Brighton’s most celebrated weekend festivals and of course, the sunshine.

November to December when the town gets all sparkly and romantic with the new Royal Pavilion Gardens Ice Rink and the magical Burning The Clock lantern parade a week before Christmas.

Get to Brighton in under an hour by rail from London Gatwick Airport, served by the Eurostar Service at St Pancras.

Brighton is a walking city so get ready to explore on foot. All you need is Google Maps to find your way around. Alternatively, you can rent a bike at Brighton Marina or on the West Pier concourse.

Buses are the best options. Get the one-day super-saver ticket for unlimited travels within the city. Bus stations are PWD-friendly, too!

Britain’s currency is the pound sterling (£).

Search for airfare deals and book your Brighton holiday now!