Hawaii is a dream destination for many travellers, a place filled with beauty and danger all in one. From sandy beaches, rich ocean life, colourful culture, set against a backdrop of being in the ‘ring of fire’ – a hotspot for active volcanoes both above and under water.

Touching down in Honolulu, Oahu, is just the beginning of the journey to exploring this pacific archipelago. Why not head out to the Big Island – the biggest, yet youngest, island of Hawaii! Funnily enough, it is still growing, as the surrounding volcanoes continue to actively add to its beautiful sandy shores.

So what’s there to do on the Big Island? Everything! From land, to sea, to sky, and even reaching for the stars! And we’re not just talking about hula dancers, ATV rides, surfing or parasailing. It’s the real BIG deal here on the Big Island.

1. Welcome to the ring of fire At the peak of Mauna Loa, the largest volcano on Earth.

Drive along the Chain of Craters, one of the most scenic drives on the island, which takes you from 4,000ft directly to sea level, over the cascading lava covered paths of the Kilauea volcano. The largest petroglyph field, carvings on volcanic rock by ancient Hawaiians, can be seen here, with some dating back hundreds of years. Take a helicopter tour to peek into the active crater of Kilauea’iki.

Challenge yourself to climb in – and of course out – of the Kilauea’iki crater, going past the crater rim rainforest into the steaming vents at its centre, where steam escapes from cracks in the ground of a grassy field. Molten lava once flowed through the Thurston Lava Tube, so take a walk through this 500-year old ‘lava cave’ and exit into a lush tropical rainforest.

For those who don’t like to be up close and personal with red hot lava, or not a fan of long hikes, you can take to the skies with a helicopter tour of the volcanoes, and even take a peek into active craters.

Did all this volcano talk pique your interest on these mysterious hot rocks of the ancient world? Well, a visit to the Jaggar Museum, specialising in volcanology and the ancient gods of the Hawaiian peoples will hold all the answers you seek. 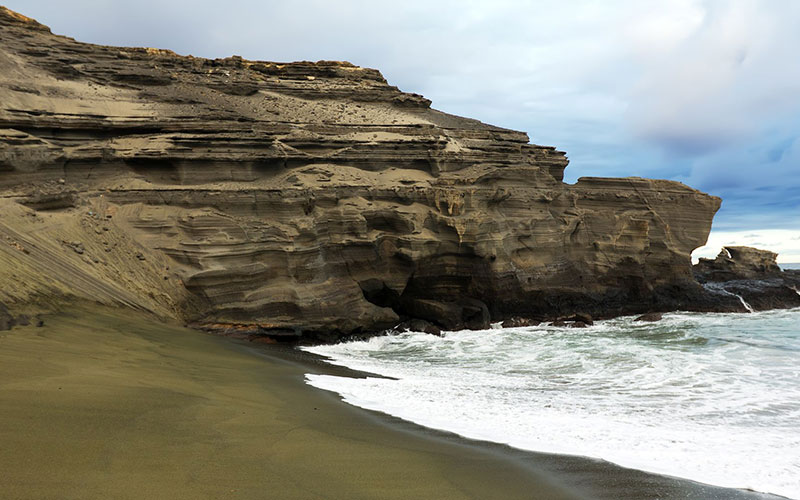 When one thinks of Hawaii, they think white sandy beaches, cool sea breeze, coconut trees and possibly chilling to ‘The Lazy Song’ by Bruno Mars. Which is a perfect depiction of paradise, but on the Big Island, the sandy beaches come in more than just the colour white.

Voted one of the ‘Best Beaches in the World’, the pure white sandy shores of Hapuna Beach is a perfect outing for the whole family. The waters are calmer here, making it a good spot for swimming and snorkeling. As part of the Ala Kahakai coastal trail, it traces the paths taken by ancient fishermen and the old Hawaiian kingdoms. Down the southern end is a beach famous not just for its colour, but for spotting Hawksbill and Green turtles basking on the black sand! Close to the Hawaii Volcanoes National Park, its black sand comes from molten lava that has flowed into the ocean. This beach is well-known for its rows of coconut palms, creating enough shady spots for all who visit.

You’ve seen white and the black sandy beaches, but green? One of only four green beaches in the world, Papakolea Beach gets its beautiful olive-hue sand from an eruption of the nearby Mauna Loa volcano – 49,000 years ago! If you look closely at the sand on this beach, you will see that it gets its green from olivine crystals. Accessibility to this uniquely-hued beach is not easy – but the trek is well worth it. Being in such a remote location means you will likely have the beach to yourself.

3. An invitation to dinner & dance 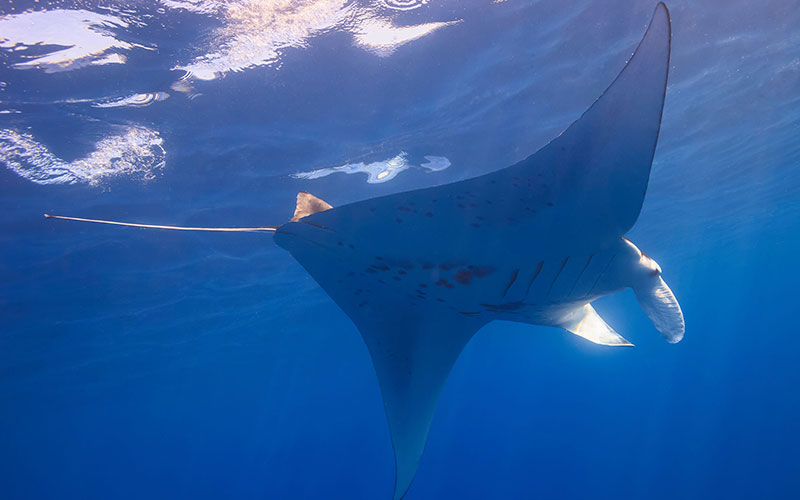 Sunset dance of the manta rays at Kona Coast

Being home to active volcanoes has its advantages – the surrounding ocean is teeming with life, and is known to have some of the best scuba diving spots in Hawaii.

Marine animals love the climate of these waters so much, that visitors will be in for a treat! Hop aboard a catamaran and spot whales and dolphins as they swim and dance during the day.

Sunset on the Big Island is call for a tremendous feast on the local cuisine – for Manta Rays. Witness as these magnificent creatures of the deep dance for their dinner along the Kona Coast. With plankton as their main source of food, the Manta Rays flock here in the evenings to feast, as well as do a dance or two with snorkelers and divers. Now that’s a dinner show worth watching! 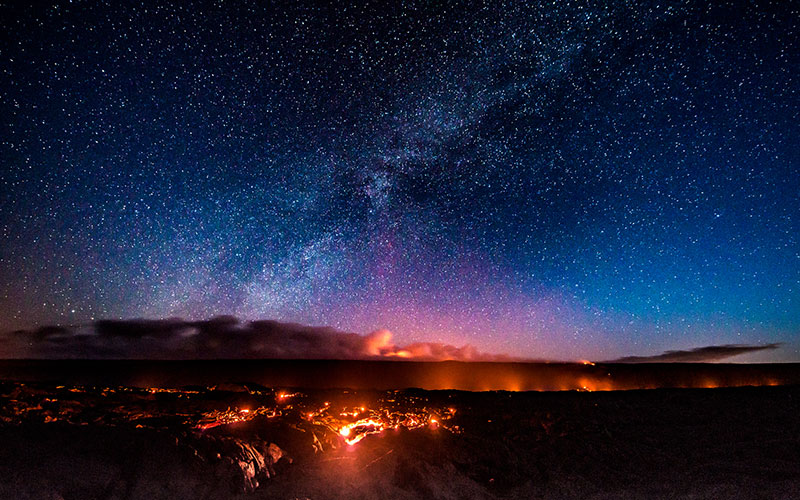 Gaze at the stars from the darkness of a lava field.

One of Hawaii’s best kept secrets can be found right here on the Big Island. Away from the glow of bright city lights, witness the rise and fall of both sun and moon, and enjoy the world’s clearest stargazing point at the sacred spot of Mauna Kea, the highest peak amongst all of the Hawaiian Islands. The Mauna Kea Observatories, two of the world’s largest, operates a total of 13 giant telescopes, and is where you can fulfill your astronomy dreams of seeing the stars in our universe in all their glory.

Not up for the trek to the peak? Don’t worry, as the skies are so clear across the whole of the Big Island, that you can take in millions of stars from virtually anywhere. Gaze at the stars from the beach, as the waves crash against the shore – a truly sensorial experience that will make you want to lay there all night long. Since it is volcano island, you could also watch the stars from the darkness of a lava field, giving you the feeling of being on the surface of the moon as you look out to the universe.

With so many things to see and do on the Big Island, you’ll need to stay in Hawaii for longer!

The tropical climate of Hawaii means that the Big Island is pleasantly warm and welcoming to visitors all year round! The ideal period to visit would be between April and June, and August to November, as visitation is low, resulting in better deals and savings on your accommodation and tours.

Take a trip there in the winter months, and you might just spot humpback whales on their annual migration from Alaska to mate and birth their young.

Being an island and not a city, public transportation is limited on the Big Island.

The best way to get around would be by car, as the top attractions are spread out across the coasts. You can rent a car at the airport or at several hotels, we recommend getting a four-wheel drive so you can navigate the roughest roads.

Taxis are available on the island, but they are expensive, even by tourist standards. Also, trying to flag one down is near impossible, unless you are at the airport.

There are buses available to take you around the whole of the Big Island at cheap rates. However, the bus schedule is not optimised for sightseeing, and are mainly used by locals to commute to and from work.

The US Dollar ($) is the legal currency in Hawaii.