Fiesta Season: The best festivals to visit around the world Festivals: they’re an event unlike any other, and each one is unique in its offerings. Now that international travel has resumed, so too has the festival industry come roaring back.

This year, we saw the grand returns of Coachella and Primavera, both institutional events in the world of music festivals. Large-scale events, while having more health requirements, are back to welcome you with open arms as you meet new friends and gain new, unrivalled experiences.

So, instead of picking out the same old, same old, we narrow down the six festivals around the world that you can plan an entire trip around – both ticketed and free-to-attend! Time to save up money, draw up an itinerary, and round up your friends.

There are several unusual festivals in Asia that you need to see to believe, and several of them are in South Korea. From the famed Boryeong Mud Festival to Kimchi festivals, the list is endless. One of South Korea’s most famous exports has, unsurprisingly, a festival dedicated to it. The mighty kimchi is celebrated every year with the Gwangju World Kimchi Festival, where the city establishes itself as the true kingdom of kimchi within the sprawling country.

Gwangju is a mere three-hour ride from Seoul via the country’s KTX high-speed train, so you will have no trouble getting there from the nation’s capital.

In the annual festival, visitors are welcomed by a stunning range of exotic kimchi – like oi sobagi (cucumber kimchi) and kkakdugi (diced radish kimchi), for starters – imported from all over the world. Its programmes will give an insight into the history and cultivation of kimchi, with exhibitions, conferences, and industry fairs that will show you just how versatile kimchi truly is.

There will also be kimchi-making competitions, painting and cooking classes, where you can learn how to prepare your own jar of precious kimchi.

This year, the festival celebrates its 29th anniversary, and they will be kicking it off with the Kimchi Bus Project. The international initiative by the festival will see several emerging young chefs travel across Russia, Turkey, the US, France and more, where they will engage in promotional activities related to Korean cuisine. The tour is set to last for 400 days.

If you feel an overload of kimchi, take a break and head over to Gwangju Family Land, the city’s premier amusement park. There are dozens of exciting rides, swimming pools, ice rinks, and sledge parks – just the place to feel the four seasons at any time of the year.

Be sure to mark your calendars: the World Kimchi Culture Festival will take place from 20 to 23 October, with just four days to see what the world has to offer with the best kimchi! An annual religious Bhutanese festival held in each district of Bhutan on the 10th day of a lunar month, the Thimphu Tshechu Festival, is a festival that one must attend when in Bhutan. Image credit: Tourism Council of Bhutan

Bhutan’s Thimphu Tshechu Festival is likely the grandest of all festivals in the country, which says a lot. It is a public holiday in Bhutan's capital, Thimphu. Tshechus are a type of festive event that draw thousands of people from all over the country, coming together to commune in traditional dances, religious ceremonies and a whole lot of libations.

The event is held on the 10th day of the 8th month of the Bhutanese lunar calendar. This means that its dates can be held in different months, depending on the year. In 2022, Thimphu Tshechu will be held from 5 to 7 October.

Its famed dances include religious mask dances – namely, the Guru Tshengye (Eight Manifestations of Guru Rinpoche) and Shaw Shachi (Dance of the Stags) – Bhutanese folk dances and a variety of performances that reflect the stoic beauty of the country and its Buddhist lineage.

Its unique location in Asia has been a draw for visitors from all over the globe. It is a must-visit destination if you want to travel somewhere new, especially if you have not been anywhere to this part of the continent! You can also find out more about Thimphu Tshechu Festival and popular Bhutan packages on Drukair.

Where: The courtyard of Tashichho Dzong, Thimphu, Bhutan In Thailand, you’ll find a rich history of popular music. But dig deeper, and you’ll discover a treasure trove of emerging and independent artists who thrive within their own artistry.

When it comes to an event like Maho Rasop, though, you’ll get the best of local and international indie music. This year, they’re finally making their big return after their successful 2019 outing in the city of Rangsit, which is a mere 40-minute drive from Bangkok.

This time, big indie names like Fazerdaze, Diiv, Last Dinosaurs, Moonchild and A Place To Bury Strangers are set to travel to Asia. But one of Maho Rasop’s biggest strengths is assembling the best of the best from the region, and their own home country, creating an epic music festival that is worth checking out.

Some of the established Thai artists set to perform are Milli, a rapper whose single ‘Mango Sticky Rice’ introduced the world to the sweet, sweet delicacy. Indie rock band Desktop Error and jazz-pop outfit Dogwhine will also be performing, assembling their unique brand of imaginative music that, if you’re new to, will make a new fan out of you.

If you need a break from live music, its festival grounds offer a plethora of attractions and rest areas. Its thoughtful sustainability policies also ensure that there will be plenty of bins to dispose of your trash, along with its set-up that uses biodegradable material. But do note that you are not allowed to bring in your own food or water bottles filled with beverages inside the festival. After a long two-year break, Oktoberfest is back in 2022 and is set to be bigger than ever! Image credit: Oktoberfest

Take a stroll across Clarke Quay or Club Street around September and October and it feels like you’re already in Germany. Yes, Oktoberfest has been a worldwide celebration of the frothy drink, but there is nothing like travelling for the real thing.

As you can imagine, Oktoberfest in Germany is a storied tradition, and a national celebration that unites all races and nationalities. Held annually in Munich, Germany, Oktoberfest marks its 187th festival in 2022.

Despite its wide access to beer, Oktoberfest is the country’s premier family-friendly attraction, as the event remains a showcase of its long-held traditions – you can find parades of locals dressed up in traditional costumes, music performances, carnival rides, royal gun salutes and more. So get ready to party like a local at the Munich Oktoberfest in 2022.

Of course, many flock to Munich to get their beer on, and you will absolutely not be disappointed. There are 38 massive beer tents, each with their own stalls of local and international breweries with beer by the barrel. 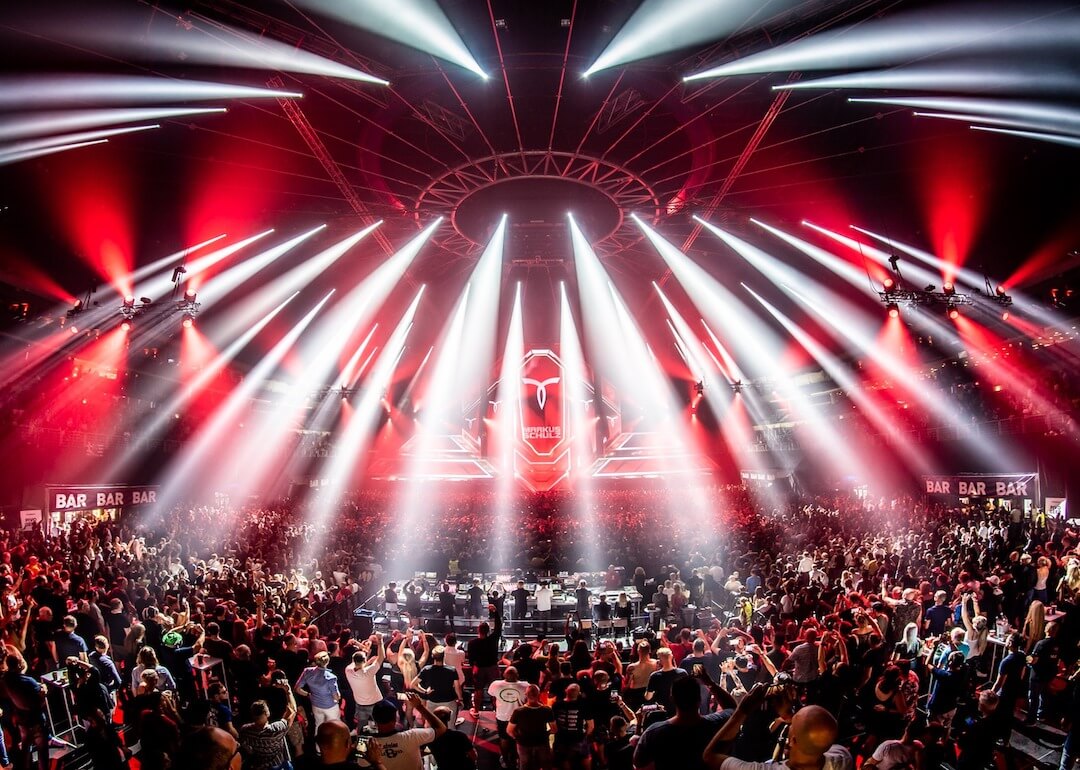 Transmission is a spectacular show that creates an unforgettable experience for all of those who love music. Image credit: Transmission Festival

Sometimes when we go to a music festival, it is to watch our favourite artists or catch up on the new sounds that we’ve lagged behind on.

While you might have heard of the Sziget Festival that is held in Budapest, Hungary, this will surely satisfy you if you’re looking for a festival that serves up a feast for the eyes and ears. Gone are the days where you’ll have to host a makeshift festival in your ears with just your headphones. This is where the world-renowned Transmission Festival comes in.

The yearly trance music festival is famed for its first-class line-up of electronic music acts, along with a festival layout that encourages communal partying and a generous amount of stage lasers that feel incredibly immersive.

The Transmission arena is also something to behold, and it’s one that attracts dance music ravers from all over the world to it.

While its line-up is not officially out yet, you can rest assured that its organisers will assemble a list of performing acts not to be missed. 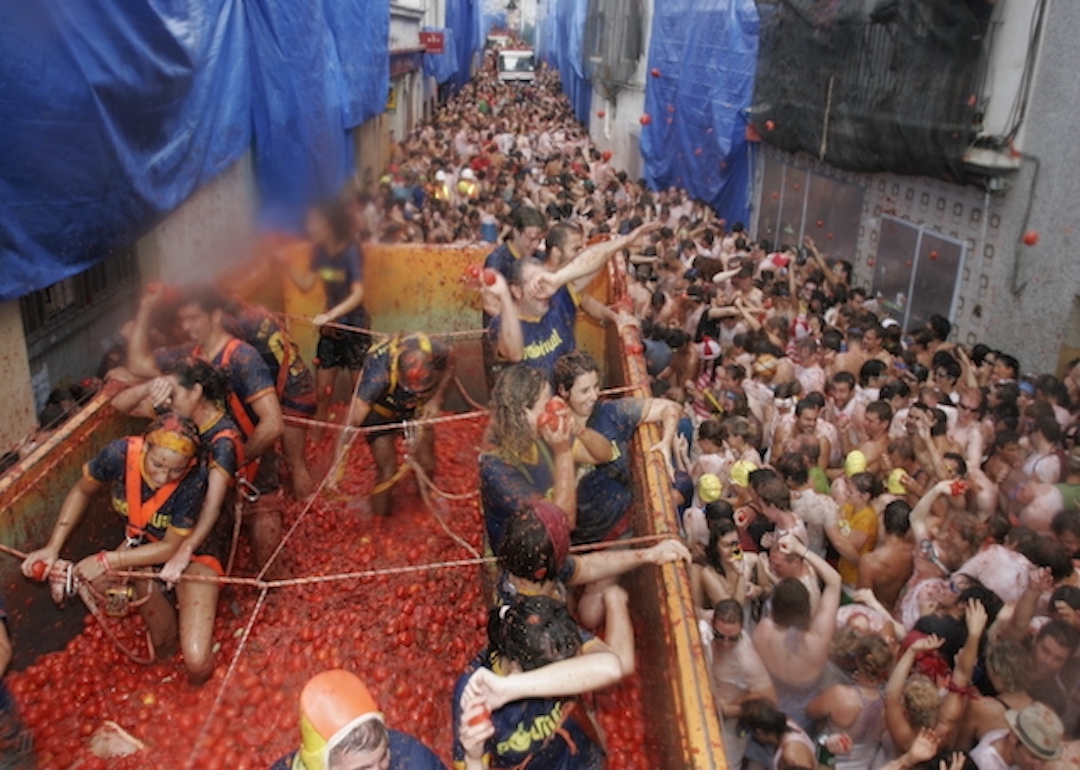 Known as the tomato throwing festival, this food fight of a celebration is one worth partaking in if you are ready to get down and dirty. Image credit: Wikipedia

La Tomatina may be the only event in the world where throwing tomatoes may not be an entirely bad thing.

You know those scenes in kids films where the main characters start a food fight in their cafeteria? You can do that safely here without any fear of being expelled.

La Tomatina is Europe’s tomato throwing festival, held in Buñol, a town in the eastern part of Spain. This year’s edition was held on 31 August. If you’re planning for a visit to Spain, you can consider travelling in the last week of August as the food fight festival is held on the last Wednesday of August each year.

In 2015, an estimated 145,000kg worth of tomatoes were thrown during the festivities, so you know they take it seriously.

Do not be daunted – the festival is purely for fun, laughter and togetherness. You’ll get to participate in literally the world’s biggest food fight while making some new friends.

While it originally started as a free festival for its local residents, its novelty has since attracted over 40,000 people. Therefore, you must book a ticket to participate – the festival offers attractive 3D2N hotel packages, which start at a mere £175 (S$305) that will grant you access to the festival and a warm bath after you’re done for the day.

Buñol is a small town, after all, so accommodation will be limited there. For those who may be booking late, consider getting lodging at Valencia, which is just 38km to Buñol by bus or train.

When: Last Wednesday of August each year

Now that you know which festivals to mark down this year, you’ll be left assured that your travel plans will be far from dull and uneventful.

Festivals are always a sign of a buzzy town, so if you want a break from the crowds, you can always explore each respective city and find something new. Travelling is always fun when there is an element of the unexpected.

There are plenty of direct flight options to travel to South Korea, Germany, Thailand and Spain, but do note that travelling to Gdansk requires one mid-way stop. Meanwhile, for Bhutan, only Druk Air offers direct flights from Singapore.

Time to plan and book! Have fun.