Travel for good: 4 destinations for the big-hearted and the curious

New foods, habits and cultures are just some of the things that travelling allows for, and along with it comes eye-opening experiences that can never be found within the comfort of home. These experiences narrow the distance between different cultures and more often than not, provide avenues for social causes that cater to many varying interests. Check out these meaningful opportunities the next time you are in these Southeast Asian destinations, and allow them to bring to mind a newfound sense of appreciation!

For the ocean admirer: The Dorsal Effect – Lombok, Indonesia

The Dorsal Effect organises eco-tours led by local fishermen who used to hunt sharks for their livelihood. With The Dorsal Effect’s initiatives, local fishermen no longer have to rely on hunting sharks and other endangered marine species to support their families. Instead, when you go on one of these unique boat rides – which are guided by men who grew up with the ocean as their backyard – you would actually be playing a part in the conservation of sharks and the fragile marine ecosystem.

Not always rain in rainny season. The sun can be very shinny for many days. Join us a day #boattrip with #thedorsaleffect to support the #fisherman livelyhood in #lombokisland and it is the one of #lombokhighlights that is meaningfull. For more detail, feel free to browse on www.thedorsaleffect.com #pinkbeachlombok #agushariantophotography

Options for these tours include half-day snorkelling and beach-hopping boat trips, or two-day boat trips that include an overnight homestay at a fish market.

While you’re on your boat trip, one of the stops you can look forward to is the “Pink Beach”,  known for its fine-coral sand and pink hues, alongside the many other unspoiled natural wonders of Lombok.

Go on a fishing trip on the Mekong with master fishermen at Backstreet Academy!

Backstreet Academy connects local master artisans with tourists who want to learn more about local crafts and culture. As a social enterprise, Backstreet Academy works with disadvantaged communities and NGOs to help build better livelihoods through training and education. By participating in an activity listed by them, you would be giving the disadvantaged communities an opportunity to break through the crowd in a tourism market monopolised by larger corporations.

These activities are carefully sourced and curated to ensure that you take away an authentic and unforgettable experience from the city. It is a special way to discover Cambodian culture and learn from some of the most interesting people whom you otherwise might have never had the chance to know.

Cultural experiences you can look forward to include learning how to make your own leather goods, cooking in a local household, practising the local martial arts, or for those with a strong stomach – take on the curiously named “Khmer Evil Cuisine” feast!

If you have time to spare and happen to be near northern Cambodia, the Angkor Archaeological Park is another place to discover the ancient beauty of the city. A UNESCO World Heritage Site, the entire area covers 400 square kilometres of forestland, with more than 1000 temple structures of various sizes. 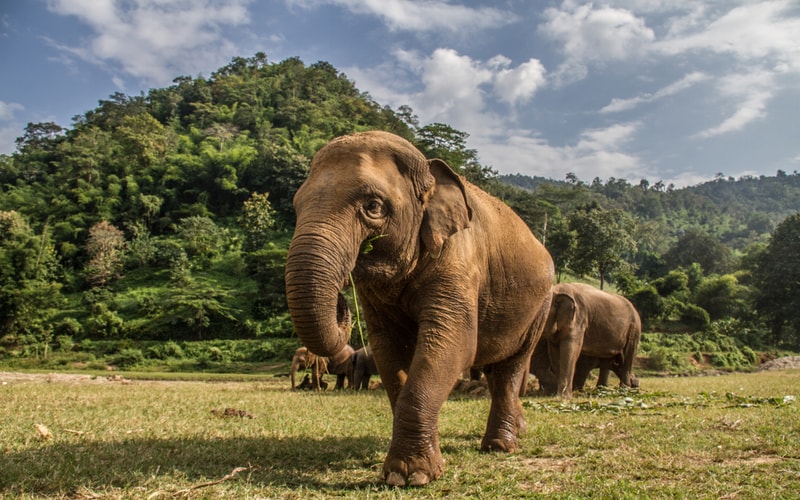 Elephants are free to roam around in this safe haven.

Elephants are majestic and beautiful creatures with an emotional capacity comparable with that of humans. Sadly, many of them are exploited in tourist attractions and rides – especially in Asia. Set up with the mission to rescue and rehabilitate these abused elephants back to health, the Elephant Nature Park on the outskirts of Chiang Mai is a sanctuary that allows visitors to interact with them in a safe environment.

Let’s talk about ethical animal interactions. It’s a sad fact about traveling that animals are often exploited for the benefit of tourists. Elephants, of course, are the big one. Riding an elephant is harmful for the animal and if you’re unaware of this I’d definitely encourage you to google the issue and think twice before riding one. But it’s not just riding - elephants that have been trained to perform tricks are taught using cruel methods that cause them severe pain and lasting trauma. We saw an elephant in India trained to “bless” people who gave her a coin, the coins of course went to her owner. The elephant looked so sad and lonely, it broke my heart. Elephant Nature Park, however, is the real deal. No riding, no tricks, you just get to spend time saying hello to these beautiful wise creatures. I wish all animals could live freely in the wild, but for these elephants that have been rescued from cruel conditions, it really seems like they are loved and cared for and allowed to thrive in an environment where their needs are put first. But it’s not just elephants. Tigers, whale sharks, turtles, monkeys, pigs, dolphins - these are just some of the creatures who may be harmed by well-intentioned but uninformed tourists who don’t do their homework before embarking on an animal encounter. I would just encourage everyone to do some research. It’s ok to want to see exotic animals on your travels. The world is full of incredible creatures, after all. But remember that they’re living things, too, and they don’t need humans to train them or feed them or poke them with sticks. Animals just want to exist, like we all do. Be kind and do good. - - - - #screwtheitinerary #chiangmai #elephants #elephantnaturepark #chiangmaithailand #thailand_ig #lostinthailand #thailandismagic #visitthailand #discoverthailand #thailandinsider #thailandgram #thailand_allshots #teamkaptainkenny #girlaroundworld #girlsthattravel #traveltagged #thetravelwomen #traveladdicts #girlsmeetglobe #traveltheglobe #travelinladies #livetotravel #wandertheworld #femaletraveler #theeverygirltravels #traveltagged #passportcollective #femmetravel

Besides feeding them or watching them bathe and play in the river, you’ll also learn about how they interact with each other. Although there is strictly no saddling or riding of the elephants, you can, instead, walk right alongside them as they roam freely around the park. The opportunity to interact so intimately with these gentle giants is very popular and gets booked up fast (especially if you want to spend a couple of nights in the park), so do pre-book in advance! (Pro tip: in case elephants are not your kind of thing, this sanctuary is also home to a variety of other rescued animals – dogs, cats, and even water buffaloes that would have otherwise been doomed for the slaughterhouse.)

A three-hour drive from Chiang Mai, the charming hillside town of Pai has a reputation of being a laid-back hippie enclave oozing bohemian charm. Café-hop and shop for quirky souvenirs along the quaint main street in town. Also, keep your eyes open to spot Pai’s very own version of “Jack Sparrow”! Surrounded by a landscape of canyons, rivers, and hills of coffee plantations, Pai is the perfect spot to kick back your shoes, disconnect from the world, and recharge. Explore the islands of Palawan while supporting green movements by the locals.

“Tao” – which means “human” in their local language, organises expeditions that partner with local islanders to explore the untouched paradise islands of El Nido bay. It has been rumoured that the secret island in “The Beach” (the movie starring Leonardo DiCaprio) was inspired by El Nido’s hidden lagoons and magnificent limestone cliffs.

Experience our island architecture. #taophilippines #taoexperience #islandlife #palawan #architecture #travelstoke #culture @tinawalsberger: "Just got back into wifi after 5 of the best days island hopping and glamping in #Palawan with #TaoPhilippines. We slept in huts like these every night, looking into the ocean, surrounded by a new group of holiday besties. Loved these babes Emma & Nikki 💛"

When you embark on a quest with Tao Island Expeditions, it is more than just going on an adventure – you are supporting green efforts such as recycling and waste-reducing movements. The three- or five-day adventure includes island-hopping with no fixed itinerary through the spectacular archipelago in the day, and camping Robinson Crusoe-style at night on secluded island retreats. Meals are prepared with seafood freshly caught by local fishermen that day, coupled with vegetables from Tao’s organic farm. Even though there is no WiFi, air-conditioning, or television, there are alternatives – relaxing dives in crystal clear waters, sleeping under the stars, and interesting people from all over the world. It is the perfect escape from the bustle of the modern world where you can reconnect with yourself.

One of Palawan’s top travel spots is the Underground River that cuts through winding tunnels and large cathedral-like caverns. At 8km long, it is one of the longest underground rivers in the world! Explore the alien-looking world of the underground river network on a narrow paddle boat, and marvel at the scale and beauty of million-year-old rock formations. However, because only a set number of visitors are allowed to paddle down the river per day, be sure to book the tour early. They can get filled up to a month in advance!

It is not always about where you’ve been, but the people you meet that help shape your travel experience. The most unforgettable travel memories are often in the places where you’ve forged genuine relationships, and as a result, left a bit of your heart behind. Where are the places that have touched you the most? Share your stories with us!