Wake up to the land that discovered coffee: Ethiopia

Can’t imagine a day without coffee? Why not take a flight and wake up in the land where it all began: Ethiopia.

The word coffee itself is said to come from Kaffa, a region in Ethiopia where the first coffee plant was discovered – quite by accident. Legend has it that, about 12 centuries ago, an Ethiopian herder noticed his goats were extraordinarily energetic after eating berries of a certain plant. When he also tried the fruit, he found himself just as energised. 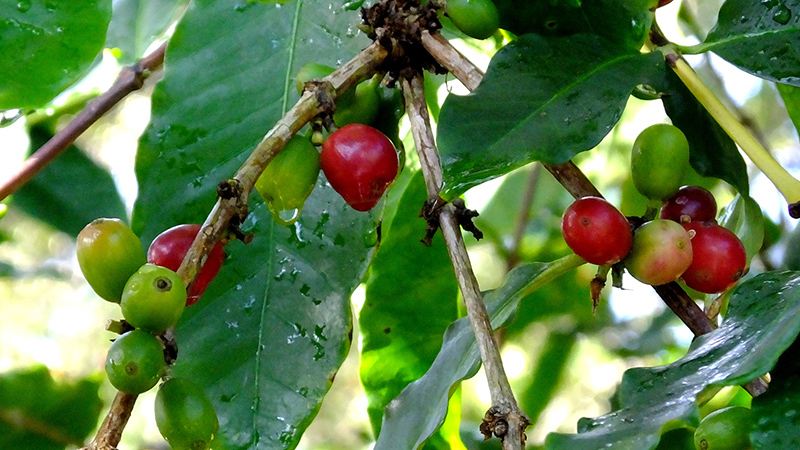 The berries from which your favourite brew comes

In one version of the legend, the goat herder shared these berries with monks - who disapproved of the berries’ strange energising effects, however, and threw them into the fire to destroy them. To their surprise, as the berries were exposed to the heat, a delightful aroma filled the air – the very same one coffee lovers have been obsessed with ever since.

From Ethiopia, news of this tempting brew spread to the Arabian peninsula, and the rest as they say is coffee history.

A country of coffee connoisseurs

Centuries after the invention of coffee, Ethiopia has become Africa’s biggest coffee producer and the world’s fifth. Its long and proud coffee history has made it a nation of coffee lovers. In fact, in the capital Addis Ababa, coffee culture is alive and well. And Ethiopians really love to drink their own, accounting for at least 70% of Africa’s domestic coffee consumption. What’s really interesting to note: to Ethiopians, coffee is not just a caffeine boost, it’s a social and spiritual tradition.

Like the Japanese people’s sacred Tea Ceremony, Ethiopians have their equally revered Coffee Ceremony. Called the Jebena Buna, this ritual’s so important, it’s observed not once, not twice – but three times a day; in the morning, at noon, and in the evening. The ritual requires patience and skill. First, the cooking apparatus has to be carefully arranged. Then the green beans are washed and roasted over hot coals until they turn charcoal black. As the beans burn, their aroma will draw friends and family to gather. Next, the now blackened beans are ground by hand with a wooden pestle and mortar, then brewed twice in a clay coffee pot called the jebena.  Eventually, the brew will be ceremoniously poured into small cups and served. 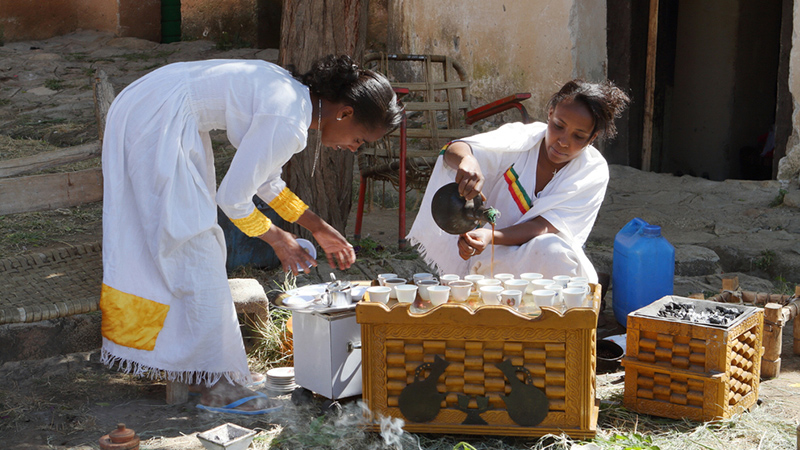 The Coffee Ceremony is performed only by women, often in traditional dress

Just like its Japanese counterpart, the ritual is performed only by women usually dressed in traditional outfits. Preparations will take at least half an hour, but the coffee will be worth the wait. Dark, bitter and usually sweetened with heaps of sugar, it’s said to be very delicious. The best coffee you’ll ever find in Ethiopia.

If you’re ever invited to an Ethiopian coffee ceremony, do accept, because it’s considered a great honour. Each cup is meant to be a wish for “fullness of life” for the guest. It’s important to drink at least three, as the third (called the Baraka) bestows a blessing on the drinker. With these three cups, the spirit is said to be transformed.

How does Jebena Buna compare to other coffees, you might wonder? Locals say machine-made coffee is “hard” while Jebena Buna is full of flavour.

After the Jebena Buna, the second most popular coffee is the Ethiopian macchiato, an influence of the Italian occupation of Ethiopia in World War 2. Another popular drink is the Spris, a 50-50 mix of coffee and tea in the same cup – an alternate take to ‘yuan yang’ in Singapore and neighbouring regions! 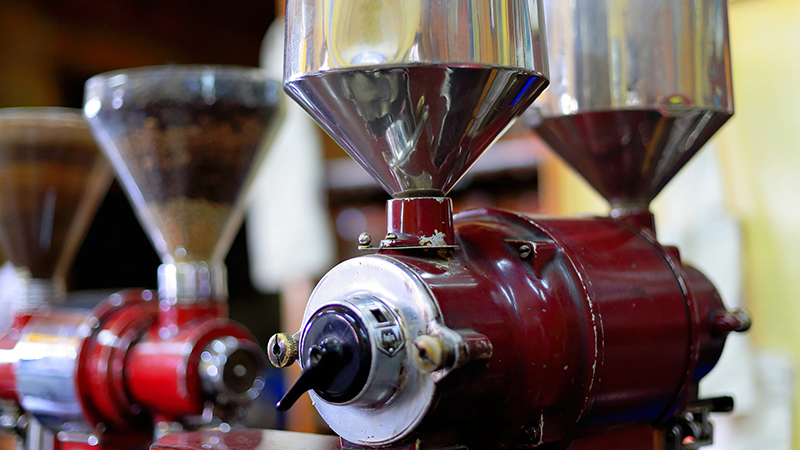 Apart from the local coffee, Ethiopians also like their coffee Italian-style

There are no Starbucks outlets in Ethiopia, but there are Starbucks-inspired local chains serving an international array of coffees. Like Starbucks, these shops encourage customers to sit and linger. The more traditional shops, on the other hand, offer no seats at all, but customers are happy to just stand while they enjoy their coffee.

Now, if you’re looking for an authentic Jebena Buna experience, but can’t get invited to one – you can still get your fill at Addis Ababa’s never-ending array of hole-in-the-wall coffee shops. In shops as small as a closet, vendors will roast, pound and brew coffee in the traditional Jebena clay pot, just like the way it’s been done in Ethiopian homes for generations.

What to do after your coffee break

After getting properly caffeinated, get ready for some challenging but ultimately rewarding treks. A must-visit is the Unesco World Heritage–listed Simien Mountains National Park, one of Africa’s most beautiful mountain ranges, in Northern Ethiopia. Treat yourself to endless breathtaking scenery, and get a kick out of seeing unique wildlife like the magnificent walia ibex up close. 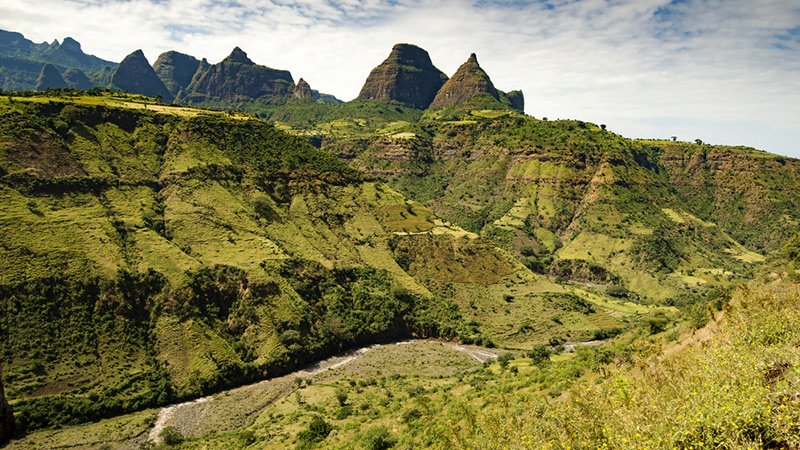 The northern highlands also offer impressive historical sites, small monasteries older than cathedrals in Europe, and rock-carved churches rich in medieval art. 16-century monasteries, meantime, are hidden away in tiny forested islands along Lake Tana, the source of the Blue Nile. A visit to Gonder, the Camelot of Africa, will treat you to some of Africa's most magnificent castles and ancient churches – you might think you’re in medieval Europe.

Of course, even if it’s easily the best coffee country in the world, a trip to Ethiopia goes beyond this magical beverage. With its colourful culture and history, and stunning natural beauty, Ethiopia definitely has a lot more brewing.

Most of Ethiopia is elevated at least 1,500 m above sea level, so the climate is quite mild, sunny and dry for most of the year. Bring a sweater for cold evenings.

Best time to go is between October and January, after the rainy season, when the land is lush and green. Perfect for trekking amidst beautiful wildflowers.

The most colourful celebrations are the two Christian festivals, the Timket (Feast of the Epiphany) on 19 January, and the Meskel (The Finding of the True Cross) on 27 September.

In the larger towns, a minibus is the cheap and easy way to get around (from around Birr2 – approx S$0.12 - for short journeys).

Before taking a taxi, always ask your hotel for a fare estimate, as drivers might charge you more.

Riding a bajaj  (motorised rickshaw) alone will cost about Birr15 to Birr20. But a seat on a shared ride seat costs Birr5.

Minibuses can also take you between towns. They cost more than a bus, but they are faster. Avoid taking a minibus at night, as they are prone to accidents.

You can find ATMs in major towns. Credit cards are accepted in some high-end hotels (especially in Addis Ababa), but in few other hotels and restaurants.

Best to bring US dollars in cash. Plus, small notes from Birr1 to Birr5 for tips, which are very much appreciated, even if they’re small.