Why picture-perfect Hiroshima is next on everyone’s Japan itinerary

As Japan is opening its borders to allow visa-free individual tourists to visit once again, those who have been waiting for this moment would be booking their air tickets and accommodation at once. After more than two years of Covid-19 restrictions, the number of tourists returning to Japan for holidays is expected to spike. If you are thinking of travelling to this beautiful land but wish to avoid crowds, you can consider Hiroshima as a stop in your itinerary – located in the south of Japan, between Osaka and Fukuoka.

Hiroshima is a city full of surprises and word is starting to spread. The beauty of its seasonal images – April’s fluttering sakura (cherry blossoms), summer’s blazing water fireworks, October’s intense koyo (colourful leaves) parks and winter’s silent splendour – are capturing the world’s imagination. Its magnificent beauty deserves a lengthy exploration, but for those with only a weekend to spare, here’s how you can explore its historic, picturesque wonders within two days.

Day 1: Take a morning stroll into the past As the site of the world’s first nuclear attack, the Atomic Bomb Dome’s ruins is Hiroshima’s most visited tourist attraction.

For history buffs, you’ll find most memorials to the Hiroshima bombing in Peace Memorial Park. Visiting all of them would be nice, but we suggest heading first to its most important attraction – the Atomic Bomb Dome. Also known as Genbaku Dome, it was the only structure near the hypocenter that survived the atomic devastation. Today, it stands as Japan’s most profound symbol of hope. 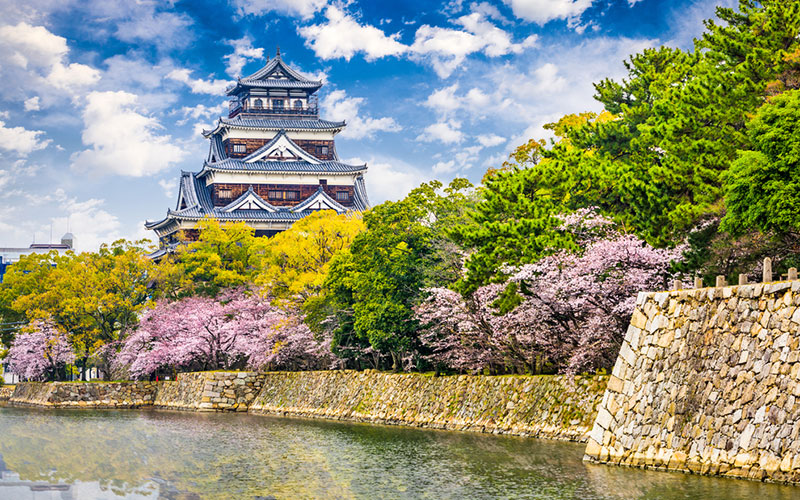 Since the Memorial tour can be pretty intense, soothe your spirits when you meander through the neighbouring Shukkeien – a serene miniature garden built in 1620, with little winding paths and bridges across ponds surrounded by graceful tea houses – and the picturesque four-century-old Hiroshima Castle, whose post-war reconstruction epitomises the city’s beautiful, indomitable spirit.

Pet a kawaii (cute in Japanese) friend in the afternoon Legend has it that eight rabbits left by visiting students in 1971 populated Rabbit Island. Credits: ©JNTO

Love animals? Brighten up your first day with a choice between these two kawaii encounters:

Feed Okunoshima Island’s furry cottontails. In the First World War, Okunoshima was omitted from maps to hide its status as a poison gas production facility. Today, it is home to 700 adorable, tabby bunnies that eagerly feed straight from tourists’ hands. Friendly as they are, do not chase or try to hold the rabbits as this makes them flee and sometimes break a bone.

Travel time from Hiroshima center: 2 hours by train then ferry. Alternatively, you can take a 30-min train and ferry ride or a 55minute direct boat from Hiroshima Peace Park to Miyajima Island. 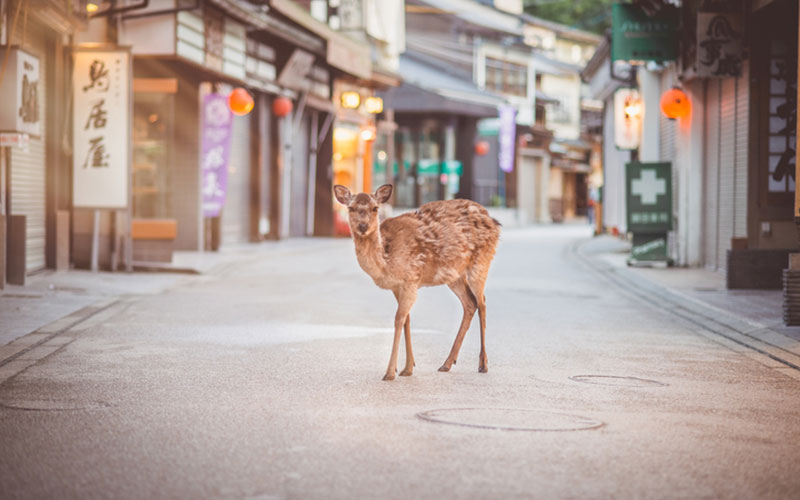 A familiar sight of a Sika deer wandering along Miyajima’s ancient, historic streets.

Befriend a deer along the historic Omote-Sando and Machiya streets. Miyajima’s 1,200 friendly Sika deers freely walk among people, gracefully “bowing” as they eat “deer cookies” that tourists can easily buy on the island. Once considered sacred messengers from the gods, their divinity – along with the emperor’s – was stripped after World War II by the Japanese government. Poor deers!

Book a night at a luxury ryokan (traditional Japanese inn)

Sleep as the Japanese of yore did and get yourself a room at a ryokan, considered the world’s oldest type of hotel. For golden slumbers, choose a ryokan that sits on a scenic, peaceful garden, with onsen (hot spring) baths. Walk an extra mile on geta (Japanese wooden platforms) and don a yukata (summer kimono) when you take an evening walk to the Five Storey Pagoda, which is just 5-15 minutes away from most ryokans on the island.

Day 2: Go on a spiritual escape for a whole day 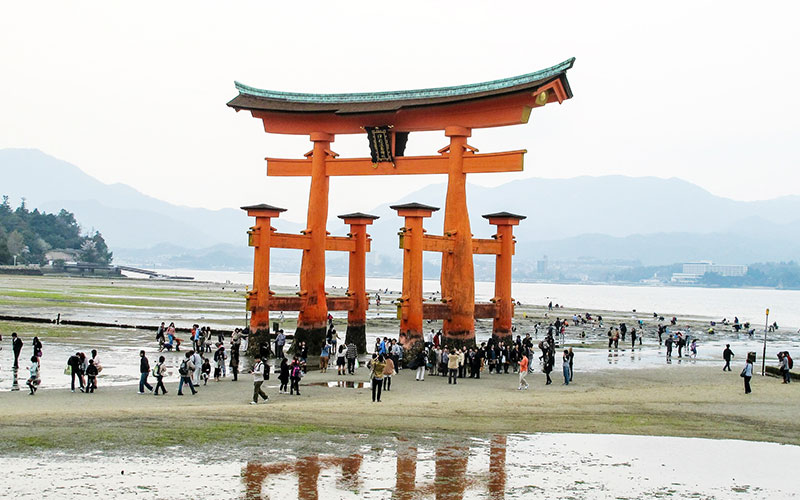 Itsukushima Shrine: one of the best “Three Views of Japan” and a UNESCO World Heritage Site.

A mystic vibe permeates ancient Miyajima. Deemed as a sacred site, no one has been permitted to give birth, die or get buried on the island since 1878. Today, pregnant women nearing the day of delivery, the terminally ill and those near death supposedly must retreat to the mainland.

Its key wonder, the Itsukushima Shrine with its famous giant torii (gate), was built like a pier so that it appears to float during high tide. At low tide, you may walk on the bay. After sunset, you can behold the powerfully illuminated 16th century Shinto shrine, which was first built in 1593.

From the Shrine, it takes 10-15 minutes by foot to reach the foot of the island’s highest peak, Mount Misen. Worshipped since the 6th century, the mountain hosts a primeval forest, several sacred Buddhist structures including Reikado Hall’s 1,200-year-old burning fire (used to light Peace Memorial Park’s “Flame of Peace”) and an incredible bird’s eye view of Miyajima.

The map below illustrates the highlights of the three hiking courses to the top of Mount Misen: the Momijidani, Daisho-in and Omoto courses. Each course takes 1.5-2.5 hours. If you’re not keen on hiking, and to save time, take an “air walk” on board the cable car from Momijidani Station. On both days… relish an oishii (tasty in Japanese) diet 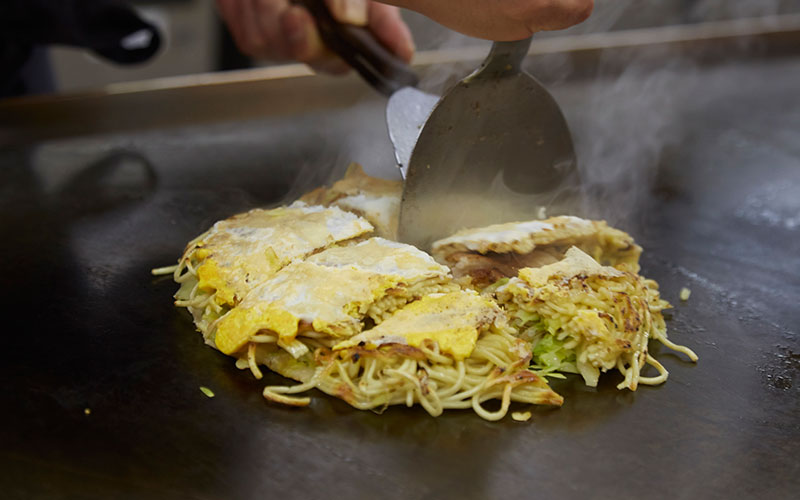 The well-loved okonomiyaki, available in over 2,000 Hiroshima restaurants, comes with a special sweet-and-sour sauce that is key to its popularity. Credits: ©JNTO

Whether it’s brunch or dinnertime, don’t miss out on Hiroshima’s mouthwatering signature tastes:

Oyster okonomiyaki in Okonomi-mura. Okonomiyaki – a savoury pancake layered with cabbage, pork, seafood and cheese, then topped with noodles (yakisoba or udon) and fried egg, then drizzled with the special okonomiyaki sauce, that is grilled on an iron-plate in front of famished diners – is the soul food of Hiroshima. In this recommendation, the beloved pre-war delicacy is topped with Hiroshima’s most popular seafood. For a comprehensive, burp-filled sampling of different flavours in one building alone, visit Okonomi-mura, Japan’s top okonomiyaki food theme park, at Hiroshima downtown Shintechi district.

Momijimanjū - momiji means maple leaf in Japanese and manjus are steamed pastries filled with red bean paste. It's a local specialty in Hiroshima and popular among locals and tourists. Image credit: Japan Travel

The world’s supreme sakes. Home to the sake, Hiroshima boasts more than 50 sake breweries. Go on a tasting tour of ginjo (soft water sake) – the revolutionary brewing method that transformed Hiroshima into a sake mecca over a century ago – in the town of Saijo (“Sake Capital”), whose breweries’ architecture dates back to the Edo Period (1604-1868). A postcard view of the Itsukushima Shrine and the Five Storey Pagoda as you approach Miyajima Island.

Where they said nothing would grow for 75 years, sakuras bloom. Where it once rained ash and chaos, peace reigns. Where a dark legacy loomed for decades, hope and beauty now awaken. It’s time to close ‘em history books and see for yourself what today’s Hiroshima has to offer the world.

With its temperate weather, you can visit Hiroshima any time of the year. But to capture the prefecture’s best colours, it’s best to fly in October-November (fall) or March-May (spring).

August marks the summer festival season that sees locals sending off lanterns into the river during the Hiroshima Peace Memorial Festival, street dancing at the Mihara Yassa Festival, and lighting up the sky at the Miyajima Water Fireworks Festival.

Winter offers only thin layers of snow, which makes for amazing postcard photos.

Eight tram lines connect Hiroshima Station with most of the city's attractions. Tram line number 2 goes as far as Miyajima-guchi, where you can ride a ferry to Miyajima. Japan Rail Pass is not valid on trams.

From spring 2018, all major IC cards, including Suica and Pasmo, can be used on Hiroshima trams and buses and the Miyajima ferry.

Make your life easier and get the Visit Hiroshima Tourist Pass for foreign visitors for unlimited rides, including on expressway buses, Hiroden (streetcar) lines, and Miyajima ferries.

The Central Post Office (CPO) near the Shiyakusho-mae tram stop is a good place to exchange your money on weekdays (9am-4pm) as well as the bank on the first floor of the Fukuya mall across JR Hiroshima Station.

You’ll find an international ATM with English menus at the CPO lobby to your right as you exit JR Hiroshima Station’s south side and in the many 7-Eleven stores in the city.

You can get to Hiroshima from Changi Airport via flights with a stopover at Tokyo Haneda Airport. From Hiroshima Airport, you can take a 50-minute bus ride to the city centre.

Search for airfare deals and book your Hiroshima holiday now!