Why Poland should be next on your travel list

When you think of Europe, countries like the United Kingdom, France and Italy would probably be the first to come to mind. However, there’s another lesser-known European treasure that many travellers have yet to discover – Poland.

Located in central Europe, Poland is a land of vibrant cities and scenic landscapes, complete with lush forests and rivers, broad plains and tall mountains. With a rich culture and history dating back over a thousand years, Poland also offers unique museums, intricate historical sites and plenty of medieval structures to add to your photo albums.

Here are some places that are a must to visit in Poland.

Although Warsaw is the modern capital of Poland, one of its most prominent tourist attractions – and every photographer’s dream come true – is the Old Town. Established in the 13th century, the Old Town features cobblestoned alleys and medieval architecture such as the city walls and the Barbican. 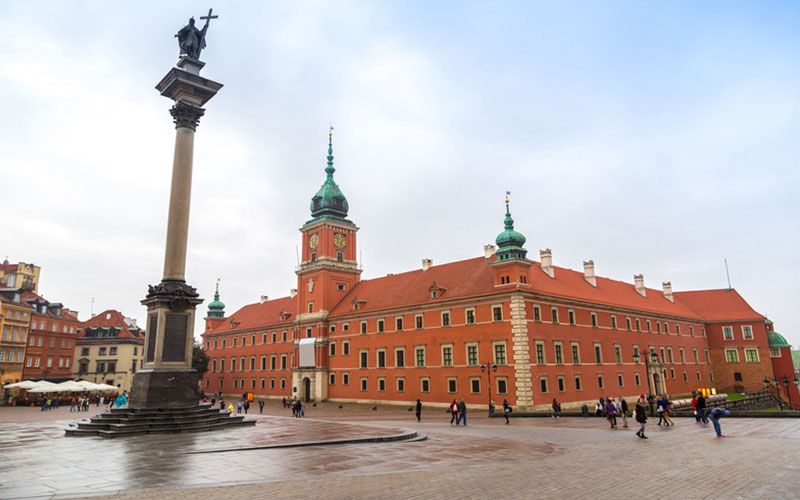 The Royal Castle is one of the UNESCO World Heritage Sites in Poland.

Just outside the Old Town stands The Royal Castle, one of the 15 UNESCO World Heritage Sites in Poland. Located in Castle Square, the castle was the official residence of the Polish monarchs throughout the centuries. With its eye-catching red brick walls, the 60m-tall vast complex is a must-visit simply for its stunning architecture.

Warsaw is also home to many interesting museums, such as Muzeum Karykatury at Kozia Street. Established in 1978, the museum contains over 20,000 works from Polish and foreign artists. Regular exhibitions, both individual and thematic, are organised either on the premises of the museum or at other cultural venues in and outside Poland. 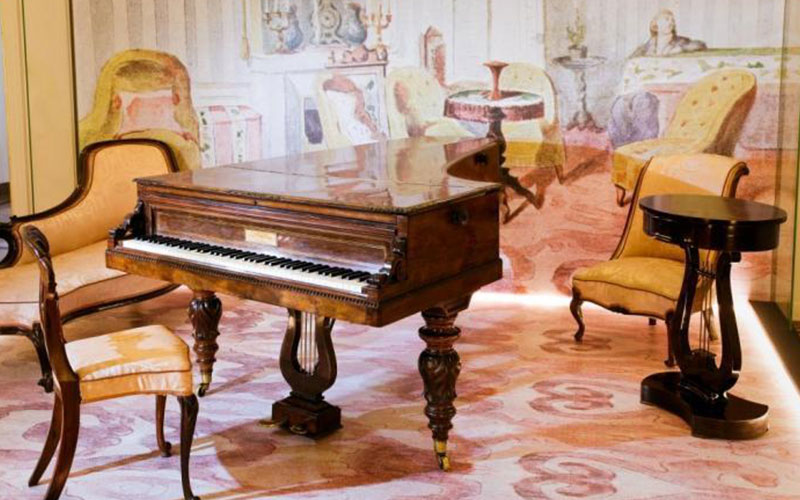 For fans of classical music, you will want to visit the Fryderyk Chopin Museum located at Okolnik Street. In the museum dedicated to the classic Polish composer Frederic Chopin, you can learn about the history and works of the late composer through original manuscripts and documents written by him. There are also photographs, sculptures and artifacts, such as his last piano, on display.

If you’re a nature lover, venture a little further to the Kampinos National Park. Situated on the north-west outskirts of the city, the nature reserve is a 35-minute drive from the city centre. There are an estimated 16,000 species of animals including the moose, beavers, the lynx and many other endangered species living in the park. Be quiet and gentle, and you might just be lucky enough to spot them.

Looking to do some shopping during your trip? You’d be pleased to know that Warsaw is home to the largest shopping mall in Central Europe. At an impressive 287,000 square metres, you can spend almost an entire day at Arkadia at Aleja Jana Pawla II which is home to 230 shops, 25 restaurants and a movie theatre.

History buffs will revel in visiting Poland’s ancient capital – Kraków. Due to the strategic location of Warsaw, the capital of Poland was moved from Kraków to Warsaw in 1596 when the Polish-Lithuanian Commonwealth was established. Kraków’s extensive historical architecture and mysterious man-made attractions are sure to pique one’s curiosity and fire up imaginations. 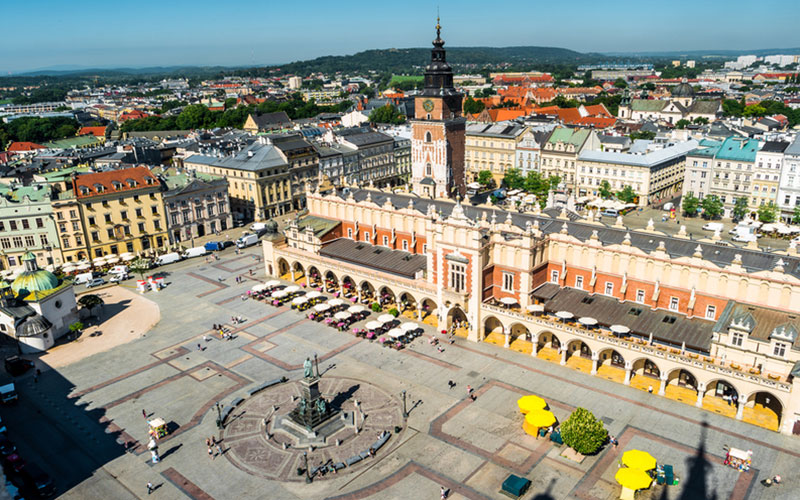 The main square of Kraków is the largest market square in Europe.

Immerse yourself in history at the Kraków Historic Centre. Situated at the foot of the Royal Wawel Castle, it is a 13th-century merchants’ town where you can find Europe’s largest market square and numerous historical houses, palaces and churches with magnificent interiors. Marvel at the intricate details of the underground chapel in Wieliczka Salt Mine.

Descend 135 metres below ground into Wieliczka Salt Mine, an original UNESCO World Heritage site. An eerie but captivating labyrinth, the mine is home to cavernous halls filled with complex salt carvings. You can also find a giant replica of Leonardo da Vinci’s The Last Supper on the walls of the grand hall.

Admire the unobstructed view of Kraków from Krakus Mound.

Another spot in Kraków worth visiting is the Krakus Mound. As one of the oldest man-made structures in the city, the site is one of two prehistoric monumental mounds in the city and is also its highest point. Enjoy sweeping panoramic views of the city from its 16-metre high summit. The main gate of the concentration camp is inscribed with “work sets you free” in German.

Although it’s about a 2-hour bus ride away from Kraków, visitors should not miss the Auschwitz Concentration Camp. A network of abandoned German concentration camps that was set up during World War 2, the complex has an inevitable eerie vibe and will certainly give you the chills. More importantly, it provides a stark but grim reality on the horrors of war.

With plenty to see and do, Poland is certainly one of Europe’s undiscovered treasures. Add this destination to your travel list with flights from Singapore Changi Airport to Poland!

Poland has a typical European continental climate consisting of four distinct seasons. The best time to visit is between March to May (Spring), and September to November (Autumn). During these two periods, the weather is pleasant and there are fewer visitors.

As Warsaw and Kraków are about 250km apart, one of the cheapest ways to travel between these cities is by train. Leo Express provides direct services with prices averaging at €7.37 for a return ticket. The journey takes about 2.5 hours.

If you’re in a rush, you can take a domestic flight by LOT Polish Airlines that takes only 55 minutes and will set you back by about €130.

Getting around the Polish cities is a breeze with excellent public transport systems in place. Every large and medium-sized city has a comprehensive autobus (bus) network. You can also find trams, also known as tramwaj, and trolejbus (trolleybus) systems in some cities, and Warsaw is the only city in the country with a metro system.

Each city has a slightly different system of ticketing and fares. One way to get around this is to watch what the locals do, or simply just ask. Most cities have a fare system based on the duration of the ride, with a standard 60-minute ticket costing around 3zł. There are other tickets available for the shorter (20 or 30 minutes), and longer (90 minutes) rides.

Taxis are another alternative mode of transport as they are easily available and not too expensive. As a rough guide, a 5km trip costs around 20zł, while a 10km ride should not exceed 35zł.

The currency in Poland is the Polish Złoty (zł). ATMs are widely available in all the cities and credit cards are accepted in most hotels and restaurants.

Fly directly to Poland with LOT Polish Airlines from Changi Airport. With return fares starting from S$815, start planning your holiday and book your tickets now!