4 incredible buildings in Singapore that will make for great shots

The swanky, mammoth complex of Marina Bay Sands may be an eye-catching landmark, but it isn’t the only architectural wonder in Singapore. Likened to a 1:1 scale model for ideal architecture, Singapore, one of the densest places in the world, is filled with incredible works by famous architects from around the world.

Known as the “City in a Garden”, Singapore is the ultimate fantasy of any architectural tourist. Here are four stunning buildings in Singapore and the stories behind them.

Marina One includes two residential towers, two office towers and “The Heart”, a retail podium located right in the centre of the development – offering gastronomic and lifestyle options. The development also features a biodiversity garden measuring the size of five Olympic-sized swimming pools, envisioned as a green civic space for communities to come together.

The eye-catching complex can be considered as one of the most accessible in Singapore, as it is connected to three out of five operating Mass Rapid Transit (MRT) lines in Singapore.

Other notable buildings in the vicinity include the lotus-shaped ArtScience Museum, where you can visit themed exhibitions and get good shots of the Singapore skyline.

Gardens by the Bay is another attraction worth visiting for its unique ‘supertree’ structures. Fun fact: This was where the Hollywood film Hitman: Agent 47 was filmed.

Designed to be a “hotel-in-a-garden” by Singapore-based WOHA Architects, PARKROYAL on Pickering is truly a feast for the eyes. With extensive greenery, green walls, water features and elevated terraced gardens, the luxury hotel stands out in an area that’s populated by conventional office buildings.

Take a dip in the outdoor infinity pool or lie back in the comfort of the unique cabanas. Photo credit: PARKROYAL on Pickering, Singapore

The hotel has won multiple awards for its green design, including the 2015 CTBUH Skyscraper Award for Urban Habitat and 2013 World Architecture News Awards’ Hotel of the Year.

The sky gardens can be found between the blocks of guest rooms. Photo credit: PARKROYAL on Pickering, Singapore

Clarke Quay, a popular nightlife destination is just a stone’s throw away from PARKROYAL on Pickering. Featuring popular nightspots like Zouk, as well as an assortment of eateries, it’s the go-to destination for young Singaporeans and tourists looking for a merry night out.

If you are looking for a more authentic cultural experience, Chinatown and its many colourful shops and restaurants are also in the vicinity.

Affectionately known as “Gotham City” by locals, Parkview Square is a commercial office complex along North Bridge Road with an opulent façade, sculptures of gargoyles, effigies of famous icons and elaborate fountains. 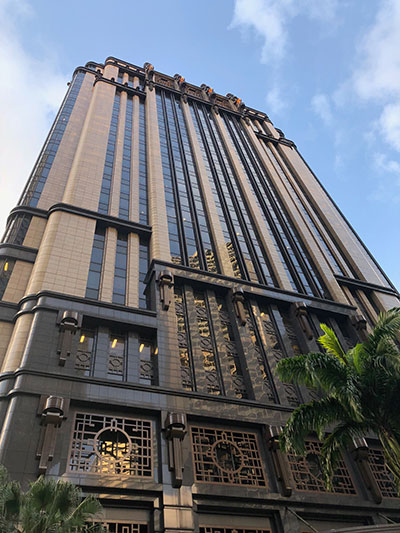 The inspiration for this building came from New York’s Chanin Building. Taking on the Art Deco look with the use of granite, bronze, lacquer and glass, the result is an imposing gold and brown edifice that would fit right into a Batman comic issue. The statues in the open plaza are inspired by some of the world’s greatest philosophers, artists and leaders.

The office building was designed by US firm James Adam Design, together with DP Architects of Singapore. It is considered one of the most expensive office buildings in Singapore by rental cost.

Situated within the building itself, the Atlas Bar is also a sight to behold. The gilded interiors, complete with lush velvet and deep copper, will make you feel like you are having an actual The Great Gatsby moment.

For a glimpse into local culture, Kampong Glam is a must-visit. Home to refurbished shophouses with Arabic-inspired architecture and businesses, the area is a reminder of Arab settlements that once dominated this district.

Built in 1960, the Golden Mile Complex is a well-known landmark among Singaporeans. It is also one of the few buildings in the country designed in the Brutalist architectural style.

A pioneer of the stepped-terrace design, the concept was meant to reduce traffic noise. It is also one of the first buildings in Singapore built for mixed-use development. Its shallow, staggered profile is aimed at improving ventilation and providing protective shading.

Its resemblance to a typewriter peppered by bright yellow hues gives the building greater prominence amongst a sea of largely generic-looking buildings.

Golden Mile is known as Singapore’s Little Thailand, due to its many authentic Thai eateries and shops, catering to the Thai migrants and workers here. Whether it’s Mookata (Thai-styled barbecue steamboat), or travel agencies with the best deals, you can get a unique bite of the Thai culture right here.

For lovers of indie cinema, The Projector is an independent screening room that showcases an extensive list of indie short and feature films from all over the world. Located on level 5 of Golden Mile Tower, it certainly is a hidden gem for film lovers in the country.

Instead of merely viewing it as a “concrete jungle”, Singapore has many interesting buildings that are worth exploring and admiring, and is a great place for architecture aficionados and photographers to spend some time at!