8 CNY customs (and how some have got a unique Singaporean twist!)

With Chinese New Year (CNY) just around the corner, preparations to celebrate one of Singapore’s most vibrant festivals are in full-swing! Amid the exuberance and fanfare, there are also interesting customs that many Singaporeans follow. These traditional practices may have their roots in ancient China, but over the years, the Chinese in Singapore have given them a unique local twist.

Curious to know what some of them are? Here are eight CNY customs found in Singapore.

In the olden days in China, when mass transportation options were inadequate and expensive, family members living in different parts of the country could return to their hometown only once a year – for CNY. Till today, this annual reunion or 团圆 (pronounced tuán yuán), or also known as 围炉 (pronounced wéi lú) which means ‘gathering around the family hearth’), is what makes this festive meal so anticipated and cherished. 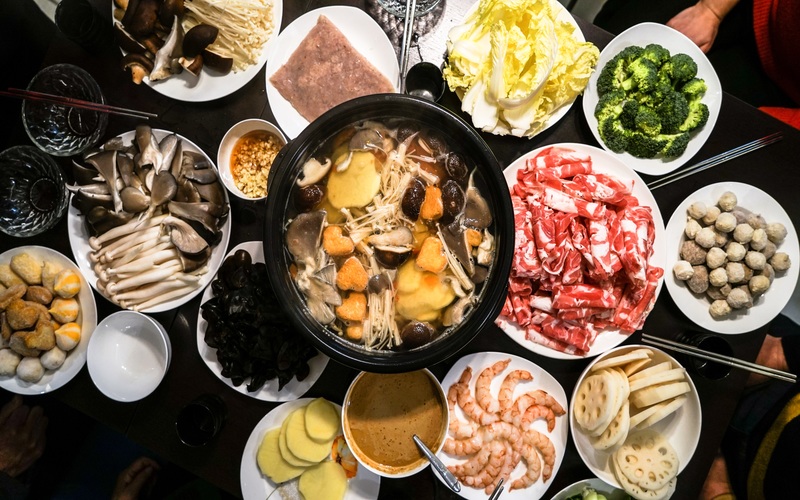 During reunion dinners, the finest dishes are prepared lovingly and served generously because the Chinese believe that having plenty of food during tuan yuan brings great material wealth for the family in the new year. The delicacies include abalones, fish maw, dried scallops and mushrooms, cooked typically with chicken, duck, chap chye (‘mixed vegetables’) dishes, or in a hotpot known as the steamboat.

Did you know: As delicious as these dishes are, remember not to finish the ones that have fish in it! It is a belief that leftovers of fish will ensure you a ‘surplus’ every year. This comes from the Chinese phrase ‘年年有余’ (pronounced nián nián yǒu yú), where the word 余 (pronounced yú) which means ‘in excess’, also sounds like the Chinese word for fish.

Typically, after having a reunion dinner, families gather together to stay awake throughout the night to usher in and celebrate the new year. This practice is called 守岁 (pronounced shǒu suì) and literally means ‘guarding the age’.

Did you know: Night owls will be happy to note that for your effort in staying up late, your parents or grandparents may also reward you with a hong bao (red packet) for good luck!

In Singapore, a popular and widely practiced CNY custom is to toss the yu sheng (or ‘lo hei’, meaning prosperity toss). 鱼生 (pronounced yú shēng), a dish comprising thinly sliced raw fish with a variety of other ingredients and condiments, originated as a humble dish with few ingredients. The higher you toss yu sheng, the luckier your new year will be.

Today, the yu sheng, which is enjoyed together with friends and family during CNY, has evolved to encompass a rainbow of ingredients with auspicious meanings. All thanks to a group of prominent chefs who gave the popular dish a fancy twist in the 1960s!

Did you know: Yu sheng may have stemmed from China, but this colourful contemporary variation with its mandatory roll-call of auspicious sayings is typically eaten in Singapore and Malaysia only.

Heralding the beginning of spring and a year of transition, 立春 (pronounced lì chūn) was traditionally an important day for farmers in China as they would pray for a good harvest.

In recent years, it has become a trend that depositing money on li chun day would bring good wealth throughout the year. The day sees long, snaking queues of people waiting their turn to deposit money into their own bank accounts, in the hope that their ‘crops’ (or savings) would grow every day of the year and bring about a larger ‘harvest’ (or wealth). Based on different lunar zodiac signs, there are specific timings to deposit money. If you’re looking to maximise your ‘huat’ (prosperity), try to do so within the designated time slots.

Did you know: You can now deposit your ‘crops’ electronically – via app! If you can’t beat the queues, this is a more convenient (and not to mention comfortable) way to deposit your money! 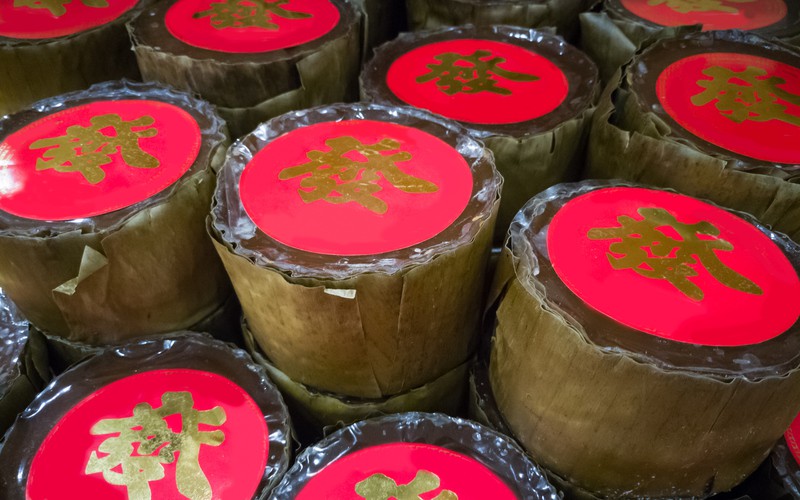 Whether it’s steamed, fried, or eaten as is, nian gao is a delicious CNY treat.

Symbolically, eating it is considered auspicious because nian gao could also be translated as a ‘high year’, with ‘糕’ sounding like the Chinese word for ‘high’.

Did you know: Making nian gao from scratch takes anywhere from 2 – 10 hours, so don’t be fooled by its simple ingredients consisting of sugar and glutinous rice flour!

CNY isn’t complete without a certain citrus fruit – Mandarin oranges. According to the Cantonese speaking Southern Chinese, giving Mandarin oranges (‘song gam’) sounds like  ‘giving gold’; thus, the giving of mandarin oranges is a gesture of wishing prosperity to the recipient. 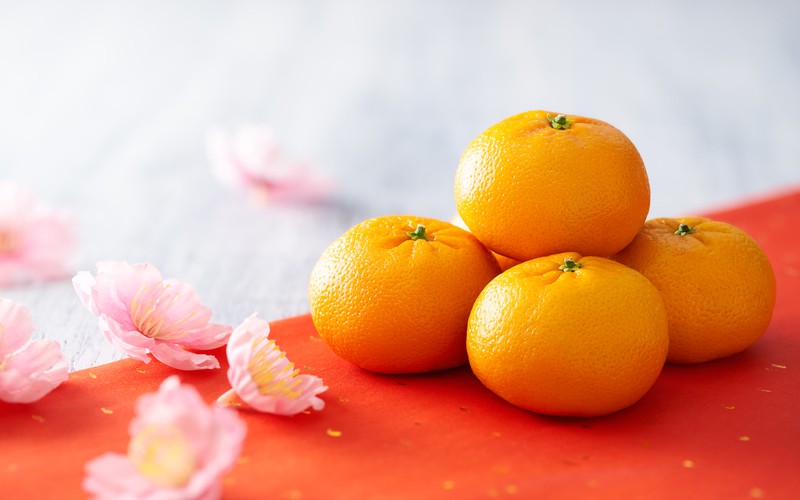 While giving Mandarin oranges, do give them in a pair (or several pairs) for good luck.

Today, guests and hosts exchange a pair (or several pairs) of Mandarin oranges, with reciprocal good wishes or auspicious words.

Did you know: While exchanging Mandarin oranges, it’s a bonus if the fruit has a bit of stem and a few leaves attached. This symbolises the giver wishing their recipient a long and bountiful life.

Ever wondered why the Chinese character ‘福’ (pronounced fú and means fortune) is usually hung on many front doors during CNY? For one, it is believed that these couplets attract good fortune and luck in the new year. 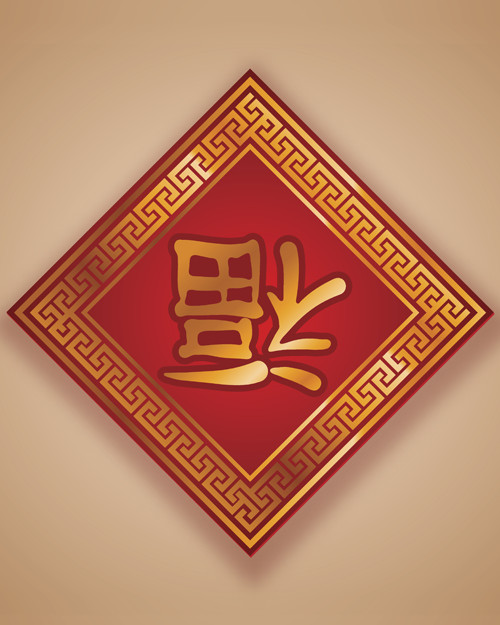 As for it being hung upside down, the Chinese word for upside down ‘倒’ (pronounced dǎo) sounds the same as the word arrive ‘到’ (pronounced dào). Therefore, when people say, “Your fu is upside down,” it sounds very much like “Your fortune has arrived.”

Did you know: A full set of chun lian consists of 上联 (pronounced shàng lián and means first strip) and 下联 (pronounced xià lián and means second strip), couplets that are pasted beside each other to represent the well wishes and aspirations of the family.

The ubiquitous red packet, or 红包 (pronounced hóng bāo), is synonymous with money. The hong bao usually contains a token sum of money and is given out by those who are married to their parents and children, and to other single adults as a token of blessing and good fortune. However, its origins had a far deeper meaning than that. More than 1,000 years ago, parents in China gave their children 100 coins each. These were called压岁钱 (pronounced yā suì qián), and literally translates to ‘suppressing age money’. This was done in the belief that the children would all live to be 100 years old. Giving and receiving hong bao during CNY is seen as lucky for both parties.

In the 12th century, under the Song dynasty, the practice of giving money in silk or cloth packets, or利是 (pronounced lì shì), became more common. Towards the end of the 19th century and till today, people have come to use the red paper packets, or hong bao, as we know them.

Did you know: While there is no rule in terms of the amount to put into a hong bao, Chinese tradition dictates that it should usually be an even number. This stems from the belief that good things come in pairs.

With a deeper, richer understanding of how these CNY customs came about, why not dodge awkward questions from relatives and use these as conversation starters instead? If you’re looking to revel in some Chinese New Year festivities, check out the exciting line-up of activities happening at Changi Airport from 19 January to 2 March 2018.