Experience the best of Singapore in 72 hours

You’ve got three days in Singapore. You don’t want to miss anything, but you don’t want to be rushed either – it’s a holiday, after all! We’ve put together a guide that covers the highlights, giving you a chance to experience Singapore’s contrasts and dine on some of the Lion City’s delicious and diverse cuisine.

Day 1: Your first taste of Singapore

You’ve only just arrived. You might be a little jet-lagged or need time to adjust to Singapore’s heat. Today’s itinerary gives you a chance to get your bearings and sample what’s on offer.

Take in the sights of Marina Bay

With its three gleaming towers and cantilevered SkyPark, Marina Bay Sands is impossible to miss. Take the short stroll from Raffles Boulevard towards the reclaimed waterfront, cross the Helix Bridge, with its distinctive DNA-inspired design, and you’re there. Check out the Art Science Museum, or dine in one of the complex’s 40 restaurants – including Tetsuya’s Waku Ghin. For a panoramic view over the city and the Singapore Strait, ride the elevator to SkyPark Observation Deck. Afterwards, head to Gardens by the Bay, a futuristic botanical wonderland. Make sure you go to the world’s tallest indoor waterfall and the spectacular grove of man-made Supertrees.

Chow down on chicken rice

Singapore’s hawker food markets are world famous. In the Marina Bay area, try the open-air Gluttons Bay. Nearby at Raffles Quay, Lau Pa Sat, one of the city’s oldest and most popular centres, is the ideal place to try chicken rice, Singapore’s national dish. With its soaring ceilings and Victorian cast-iron pillars, the atmosphere here is second to none. Maxwell Road Hawker Centre in Chinatown has over 100 stalls selling delicious and cheap Chinese food, including the famous Tian Tian Chicken Rice stall, a local favourite among foodies.

A drink with a view

Cocktails in Singapore can be on the expensive side, but there are some great rooftop bars. Top picks include the New Asia Bar on the 71st floor of the Swissotel. The Stamford, 1-Altitude, the highest alfresco bar in the world, and LeVeL33 on the 33rd floor of the Marina Bay Financial Centre, which has the highest urban craft brewery in the world. For something a little different, try SuperTree by IndoChine, perched atop the highest Supertree in Gardens by the Bay.

It’s time to immerse yourself in some of the city’s distinct neighbourhoods and iconic experiences.

Rise early in the morning and head to Kampong Glam, traditionally the city’s Muslim quarter. While you’re there, gain an insight into Malay history and culture at the Malay Heritage Centre, admire the serene Sultan Mosque, haggle for a Persian carpet or browse the boutiques of Haji Lane.

Serenity at the Sultan Mosque (Credit: Singapore Tourism Board)

Nearby, Little India is a burst of chaos and colour. Explore the sari shops and spice stalls in the local markets, and visit the thriving Sri Veeramakaliamman Hindu temple. When you’re hungry, head to the Tekka Centre on Serangoon Road for some delicious biryani. 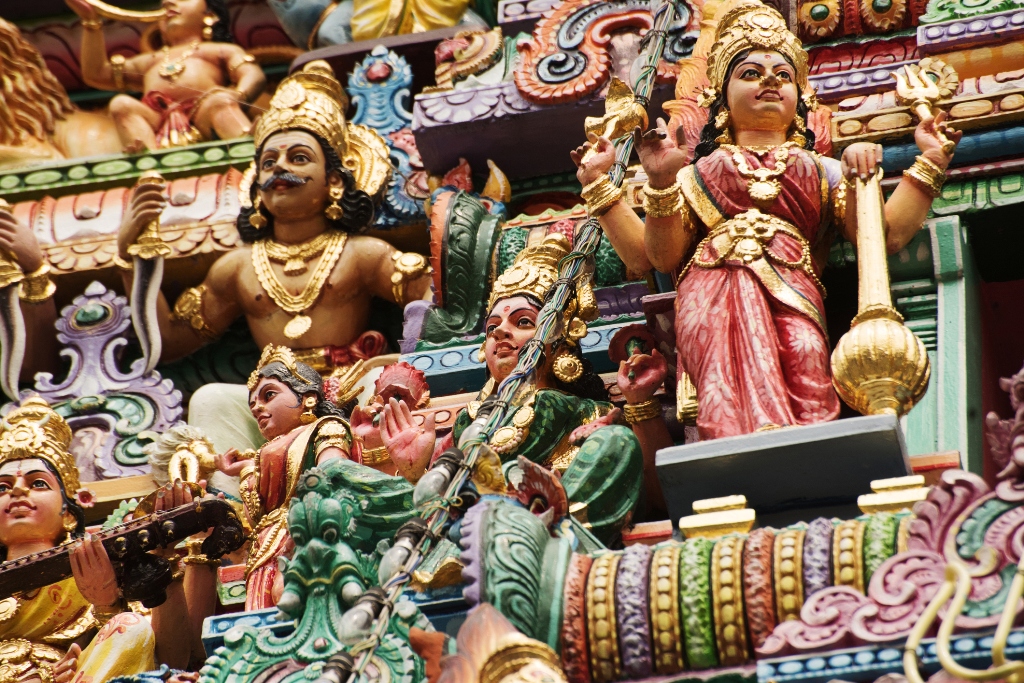 The vibrant colours of Little India

Jump in a taxi or climb aboard the MRT, and head back to Boat Quay and the Asian Civilisations Museum. Housed in the restored Empress Place Building, the museum’s extensive collection of Asian artefacts are spread across five themed displays. If you have the time, the Peranakan Museum nearby on Armenian Street is also well worth a look.

Afterwards, head to the Tiffin Room at Raffles Hotel – the 129 year old colonial-style building at Beach Road. There’s no other place like this to enjoy high tea, one of Singapore’s most iconic experiences.

If cocktails are more your thing, try the Raffles Long Bar at the hotel, home of the Singapore Sling. Interestingly, Raffles Hotel recently opened up an outlet of the Raffles Long Bar at the Wines and Spirits Duplex store located at Changi Airport Terminal 3. Passengers can have one last sip of Singapore’s quality cocktails before departure, and visitors can experience it as soon as they arrive.

So next time you are at the airport on your way out of Singapore, pay a visit to the Raffles Long Bar and take back some tasty memories of the island.

The Night Safari is one of Singapore’s most enduring attractions. A guided tram ride takes you through seven geographic zones for an up-close experience of over 130 animal species including zebra, giraffe, Asian elephants, Malayan tigers and Asiatic black bears. A number of walking trails, including the new Wallaby Trail, simulate the experience of a night-time trek.

Enjoying a tram ride at the Night Safari (Credit: Singapore Tourism Board)

On your last day, indulge in the two activities Singapore is most famous for: eating and shopping.

Get artsy in Tiong Bahru

With its low-rise Art Deco architecture, Tiong Bahru has become a popular expat enclave. The Tiong Bahru Market and Food Centre is a great place for breakfast or brunch. Try the chwee kueh (steamed rice cakes topped with preserved radish) or char siew pau (steamed pork buns). Afterwards, check out Tiong Bahru’s designer boutiques and galleries or grab a coffee in one of its cool little cafes.

Go on a shopping spree along Orchard Road

Head to Orchard Road, Singapore’s best-known shopping strip, for a spot of retail therapy. From high-street labels and high couture to Asian art and furniture, there’s something to suit all tastes and budgets. Start with ION, which rises above the Orchard MRT station. For a break from the air conditioning, wander to Emerald Hill, where you’ll find a cluster of traditional Peranakan terrace houses.

Savour every bit of chilli crab

If you’re a seafood lover, you can’t leave without trying chilli crab at least once. You can have it hawker style, or opt for a full-service sit-down meal. Or if you want an authentic beach-side experience, take a trip to the East Coast Seafood Centre, where you will be spoilt for choice looking for traditional seafood restaurants. For a more casual vibe, head to Momma Kong’s in Chinatown. And for something completely different, try the chilli crab ice cream at Labyrinth.

If you're after old-world colonial ambience (and don't mind a splurge), try The Fullerton, Goodwood Park Hotel or, of course, Raffles Hotel. For 21st century luxury, check out Marina Bay Sands or the Ritz-Carlton Millenia.

Boutique options include Lloyd's Inn, The Quincy and Park Royal on Pickering, while the flashpacker mob will love Fisher BnB, Bunc Hostel and The Pod.

After such an eventful 72 hours in Singapore, you’ll have had a taste of what this incredible city has to offer. But there are so many more things to see and eat and do – you’ll just have to come back!