A half-hour boat ride away from mainland Singapore lies Kusu island, an idyllic place which has for almost a century drawn believers of different religions seeking answers to their prayers. Legends abound about this island, and its history as a place of worship dates to at least 1813.

“Kusu” means turtle or tortoise in Hokkien (a dialect spoken in Singapore), and you will definitely spot some of these little creatures when visiting the island. Kusu Island’s history and fascinating places of worship (one Chinese temple and three Malay shrines!), are just some reasons why this is one island you should not miss when in Singapore.

Although there are many legends surrounding the island, the widely known centres around two men – a Malay and a Chinese -  and a giant turtle. While sailing near Kusu island, the men encountered bad weather out at sea and severely damaged their boat. To save them, a giant turtle turned itself into an island so that the men could land on it. 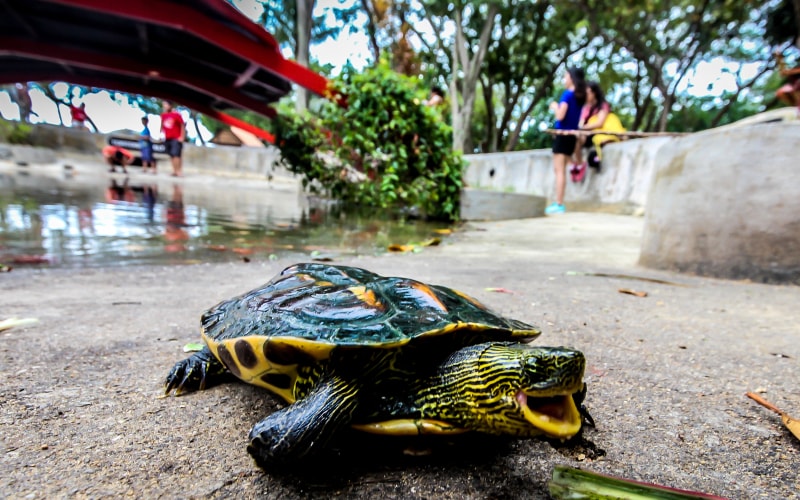 As a homage to its namesake, Kusu island has a turtle sanctuary for visitors to appreciate and admire.

As a nod to the island’s mythical origins, stone turtle statues and a turtle sanctuary can be found on the island.

The legend continues that the two men were so grateful to have survived their ordeal, that as a way of thanks, a Taoist shrine and Muslim 'keramat' (‘shrine’ in Malay) were subsequently built. Today, throngs of devotees from various ethnic backgrounds descend onto Kusu island’s shores annually between September and November (the ninth lunar month of the Chinese calendar), for an annual pilgrimage to pray primarily for health and good fortune.

Whether it’s health, wealth, or bundles of joy, blessings may be sought all year round at the Da Bo Gong temple on Kusi island

At the Da Bo Gong temple, also known as Tua Pek Kong (meaning ‘Grand Uncle’ in Chinese and Hokkien respectively) temple, devotees seek blessings from two deities – Da Bo Gong for wealth and good health, and Guan Yin, the Goddess of Mercy, for fertility. After praying at this temple, some devotees will also pay their respects at the three Muslim shrines as well.

One of these shrines is dedicated to a pious Muslim family – Datok Syed Abdul Rahman, his mother, Nenek (Malay for grandmother) Ghalib, and his daughter, Puteri Fatimah Shariffah. Inscriptions at the shrines indicate it is believed Nenek Ghalib had approached a Straits Chinese man, Hoe Beng Whatt, in his dreams and requested for the shrines to be built. To reward him as well as the other donors who had contributed financially in the construction of the shrines, Nenek Ghalib would bestow success upon them.

Historically, it served a maritime purpose

The earliest mention of Kusu island was during the 17th century when Dom Jose de Silva, Spanish Governor of the Philippines, was believed to have run aground on Kusu reef in March 1616. The island was hence first known as “Governor’s Island”.

200 years later, in 1806, James Hordburgh, a hydrographer at the British East India Company, renamed it “Goa Island”. After Sir Stamford Raffles’ arrival in Singapore in 1819, ships that intended to sail into Singapore’s harbour had to look out for Kusu island as it was the marker for entry.

With land reclamation efforts, these reefs have been enlarged to become present-day Kusu island.

Apart from its sacred sites, Kusu island is known for its tranquillity and popular for its lagoons and pristine beaches. With shelters, picnic tables and even barbecue pits on the island, consider packing along simple meals or snacks you can partake in after a refreshing dip in the sea or stroll along the beach.

Those up for a little more exploration can venture down the island’s shores during the low tides and glimpse a variety of marine life such as crabs, featherstars and sea cucumbers. However, overnight stays and camping on Kusu island are not permitted.

Got time to spare? Check out these neighbouring islands

Previously known as Pulau Sakijang Pelepah – “Island of one barking deer and palms” in Malay – Lazarus island is a 10-minute walk across a bridge that links St John’s island to Lazarus island.

Lazarus island is a picturesque 10-minutes stroll across a bridge from St John’s island.

Besides its serene Insta-worthy beach and tranquil turquoise waters, Lazarus island is another perfect alternative for picnics and solitude.

Home to sandy beaches, holiday resorts, and an assortment of other activities and services, Sentosa is an island with a dizzying mix of modern amenities. 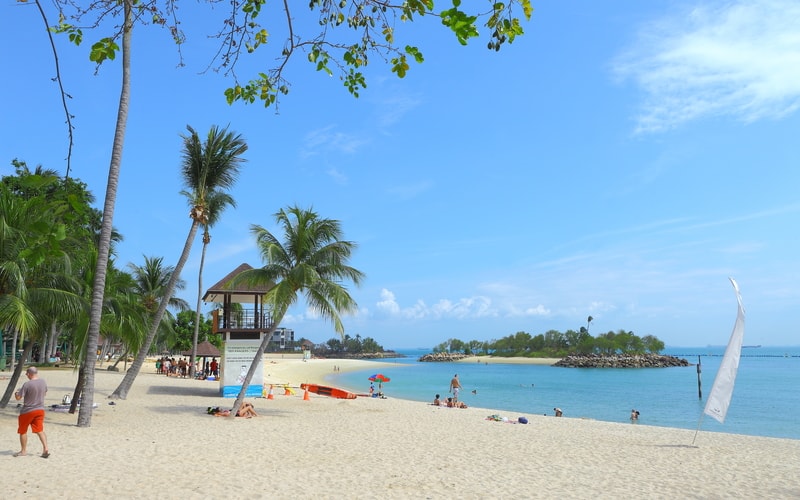 As one of Singapore’s more ‘modern’ islands, Sentosa is a tourist hot-spot as well as a weekend destination for locals.

Popular with both locals and tourists, Sentosa may be accessed through several modes of transport – on foot, or by bus, car, bicycle, or cable car.

Other than being rich in history and culture, Kusu Island is a wonderful reminder of Singapore's intimate connections with the archipelago. Do pop over to pay it a visit!

Getting to Kusu island: Depart from the Marina South Pier (minutes from Singapore’s Central Business District), and hop on to a ferry that will take you to Kusu Island in half an hour. Prices for a two way trip are fixed at $18 for adults and $12 for children aged 1 to 12 years old. No advanced or prior bookings are needed for daily scheduled ferry(s) unless you are doing a private charter.