Local traditional games to try in Singapore this weekend

When most people think of childhood games, they think of classic ones like hide-and-seek or tag. However, in Singapore, there are a number of unique games that have been passed down from generation to generation.

Singapore is a melting pot of cultures, and this is reflected in the wide variety of toys and games that were popular with kids from the 1970s all the way to the 1990s. If you are looking to build up your list of activities to try out with your friends and family at your next gathering, why not relive these traditional childhood games that Singaporeans loved to play in the past?

From kids favourites like Pick Up Sticks and chapteh to family picture card games like Donkey and Happy Family, there’s something for everyone to do this weekend.

Playing Five Stones was an exceptionally popular activity amongst kampung girls in the past.

The objective was to throw a stone into the air and pick up another stone before you catch the falling one— all using the same hand! Continue doing the same thing but pick up two stones this time. The game repeats until you’re picking up four stones at a time.

Another way to play this game is to line the stones in a row in the palm of one hand. They were then flicked into the air with a quick movement of the wrist. As the stones come down, the player must try to catch them all on the back of the hand– truly a real test of hand-eye coordination!

While Five Stones were originally played with real stones, players over the years have made the game more comfortable by using seeds, beans, rice grains, or sand wrapped with scraps of leftover fabric found at home. The fabric was then folded and sewn into a prism or triangular shape – an economical game that kept your hands busy right from the start to end.

Even though the wild popularity of this game has waned since the traditional kampung days, it is still played by many kids in Singapore through the revival efforts from schools, community organisations and government agencies.

Show off your winning moves in this highly addictive traditional game that is still very much alive in Singapore.

Originally called Ti Jian Zi which means “kick little shuttlecock” in Chinese, chapteh is believed to have originated in China and was used to train military men and Shaolin monks in their martial art skills. Over time, the game eventually spread to other parts of Asia.

In Singapore, it is played using a rubber disc topped with rooster feathers, which is also referred to as a chapteh. Variations of the name include capteh, chaptek, and chatek, which are thought to be either Malay or Hokkien in origin. The objective of the game is to keep the feathered shuttlecock in the air for as long as possible using only your feet.

Chapteh is an outdoor game that can be easily adapted to accommodate different numbers of players, making it ideal for both small and large groups.

For a solo game, the player is judged on the number of kicks he makes. The winner is the first player to reach a winning tally or attain the highest number of kicks without using his hands to touch the chapteh. Skilled players have been known to introduce innovative moves and stances, such as Sitting Tiger which involves kicking the chapteh alternatively with either foot.

For a team game, players take turns hitting the chapteh back and forth between the teams within a circle. The first assigned player will have to keep the chapteh in the air till it falls to the ground within the circle, followed by the next team member who continues the count. The winning team is the one that scores the highest number of combined kicks.

With its versatility and nostalgic appeal, chapteh is a hit with children–and adults– even till today.

Still often found in carnivals and game booths in Singapore, a game of Pick Up Sticks is a test of patience and steady hands. It can be played by two or more individuals. The objective is to remove sticks one by one from the pile without touching the other sticks. The game continues until there are no sticks left in the cluster. The person who removes the most sticks wins.

While the rules may sound easy, it actually requires a lot of concentration and coordination to remove the sticks one by one without moving any of the others. The game gets even more challenging, especially if there are a lot of sticks nestled close together in a pile.

Which child in Singapore could forget the iconic country flag erasers?

The premise of this traditional game is simple. Players would attempt to flick their own rubber eraser on top of other players' erasers or off the edge of a table. Succeed and you’ll get to take over the “losing” flag–probably the best part of the game.

While these erasers were cheap and easily available at school bookshops, some kids make it a challenge to trade or win as many different flags as possible to complete their set. It’s also not uncommon to find many erasers decked out in armour and weapons using staples or toothpicks as a spinning-top toy.

The greatest irony? These erasers were purely used for playing and not for schoolwork–much to the despair of parents and teachers.

Nothing brings people together like a good game, and in kampungs across Singapore in the past, gasing (pronounced as gah-sing) was a staple of community life. This traditional game involved winding a rope around a top and launching it into a spin. The goal was to keep the top going for as long as possible or strike their opponent's top out of the ring.

Made of local hardwood like kuran, leban, casuarina, and kempas, most gasings come in various shapes and sizes that are free of holes or cracks that can affect its balance. The most common ones were typically heart-shaped and no larger than 10cm in diameter, making them suitable for children’s small hands.

Gasing is best played on hard and sandy surfaces in kampungs. When the majority of the Singaporeans moved to HDB estates, the game slowly declined in popularity as the cement floors found there were not suitable for gasing.

Thumb Wars was another popular game that many kids played in Singapore during their recess time in school. The beauty of this game is that it requires no equipment, and can be played either rain or shine, by two individuals. Players would interlock their fingers with each other, leaving their thumb extended. The first person to pin the other's thumb for ten seconds is the winner. Children take this game very seriously and the competition can get quite heated up. 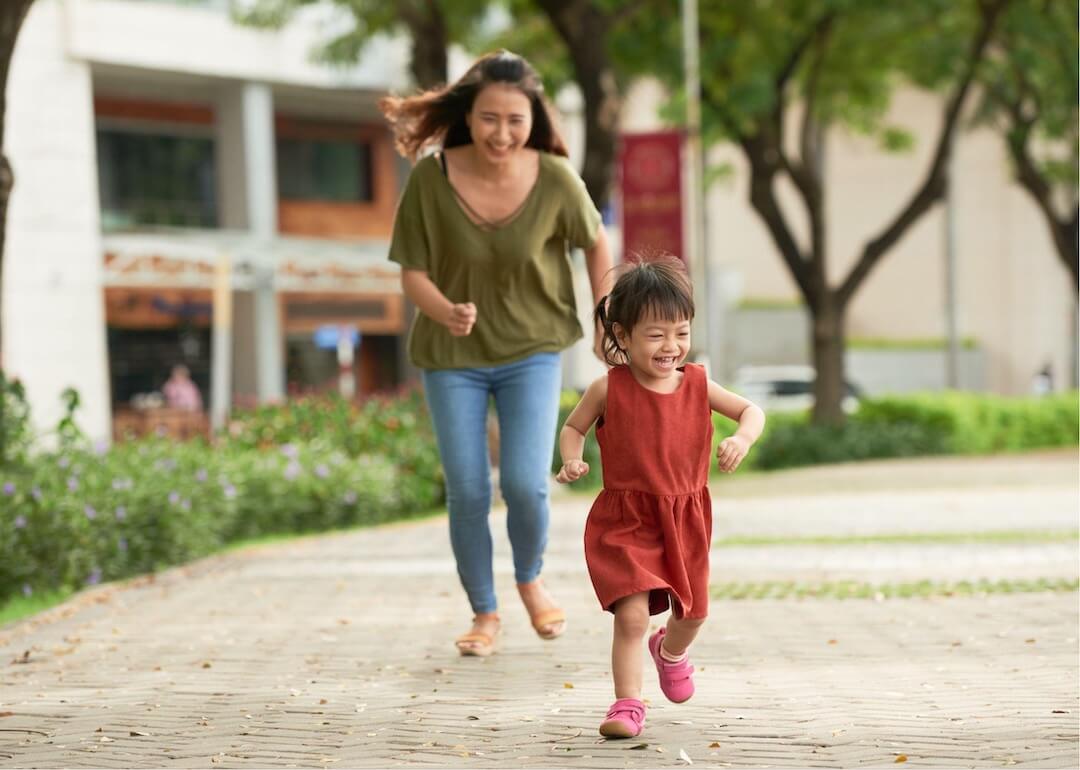 Pepsi Cola 1, 2, 3 is simple to learn, making it an ideal activity for children and adults of all ages.

Before the age of smartphones and social media, children were often seen playing this game of Pepsi Cola 1, 2, 3 with their neighbourhood friends. The only thing you need? Plenty of space to run around in!

At the start of the game, players are numbered to determine the playing order. Each one will then take three steps backwards while shouting the hallowed phrase “Pepsi Cola 1, 2, 3”. To eliminate a player, one must move towards others and attempt to stomp on their foot within three steps. Large leaps, ducking, and dodging are all allowed. Get stepped on and you’re eliminated!

While this might sound like a simple game, it required a lot of strategic thinking and quick reflexes. Do also remember to get a good pair of shoes and lace them well before you start dashing around to eliminate your family and friends.

While Happy Family is a picture card game that originated from Britain, it was immensely popular in the late 1990s in Singapore.

The various characters and their families on the cards are illustrated in a nostalgic cartoon style that depict their different occupations. The goal was to be the first player to complete the families and have zero cards on hand.

Donkey is another classic childhood favourite. To start the game, a deck of cards is shuffled and dealt out evenly to the players. Each player looks at their hand, finds a pair of identical cards and then discards the pair. They then take turns picking cards from their opponents’ hands and discarding the remaining pairs they have matched.

Here’s when you must use your trickery and wiles to get other players to grab your Donkey card and avoid getting or retaining it yourself. Or else be prepared to be labelled as a Donkey!

Another picture card game that originated from Britain in the 1880s, Snap is a popular game that has been enjoyed by children and adults in Singapore more than a hundred years later. The cards contain traditional illustrations of individuals in various nationalities and costumes, such as Welsh Girl and Irish Boy.

Two or more players can play Snap. To start, each player is dealt a hand of cards. The player to the dealer's left begins the game by placing a card in the centre of the table. The next player then places a card next to that card. If the two cards match, one must shout "Snap!". The faster player will take the pile of cards. The game continues until one player has all the cards, at which point that player is declared the winner.

Where to get these traditional Singapore games and toys?

Most of these traditional Singapore games can be bought online. For those looking for a brick-and-mortar shop, consider heading to SKP, which has many branches all over Singapore.

Take a blast back to the past this weekend

These games may seem simple, but they provide hours of fun and are an important part of many Singaporeans’ childhood memories. More than just a source of entertainment for kids; they are also a reminder of Singapore’s rich history and culture.

Whether you’re a local or tourist, round up some friends or family and give some of these classics a try this weekend! While you’re at it, how about also rediscovering and exploring old-school bakeries for desserts and these historical attractions in Singapore that will take you down a trip to memory lane?