You’ve just arrived in Singapore and are struggling to understand what some Singaporeans are saying although you hear distinct English words. You thought you had read the guide books wrong about English being the country’s official language. Relax… or as Singaporeans like to say “Relak lah!” (chill a little). You’ve just had a taste of Singlish!

Singlish is a local lingo that first emerged after Singapore’s independence in 1965. English was decreed the nation’s official language to be used formally in government institutions and schools. That is the case but in reality, Singlish rules the street and is commonly used in more casual settings.

Singlish perfectly encapsulates the city state’s multiculturalism and immigrant roots. It’s really rojak (a local fruit and vegetable salad dish, but also used in the context of describing an eclectic mix) with words and phrases borrowed from Malay, Tamil and Chinese dialects like Hokkien and Cantonese.

It can also be quite atas (sophisticated). In 2016, 19 Singlish words were added to the Oxford English Dictionary, and the language has been recognised as so unique that it is studied in universities from Boston to Germany.

Singlish is ubiquitous on the island so it’ll be handy if you can get the hang of it. Here’s a quick and easy guide to help you make sense of it and hopefully, use it to make friends and get around.

Why you should learn Singlish

True to Singaporeans’ fondness for efficiency, Singlish is snappy with a few words packing a plethora of meaning and ideas. In the process, it blends, bends and upends the strict rules of traditional English grammar. So why be so lor sor (longwinded) when you can use a few choice words to get your point across?

Singlish also uses imagery and metaphors in a colourful and humorous way. For example, the term kancheong (anxious) spider is used, because spiders are often seen scurrying about in a panic. Another hilarious example is (to) merlion - a reference to the iconic half-lion, half-fish very Singaporean icon that spouts water from its mouth. It is commonly used to describe what happens with excessive drinking - an occasional sight you can spot at Clarke Quay, a stretch of drinking establishments situated on one side of the Singapore River, especially during festive seasons.

If you want to make kakis (buddies) out of Singaporeans, the quickest and surest way is to sprinkle some Singlish into your conversations. Singlish is friendlier (to Singaporeans) and often used in informal situations. It allows casual intimacy with strangers so use it with your taxi driver, while ordering food at the hawker centre or shopping.

How to speak Singlish

#1: Shorten words and sentences. Singaporeans love being succinct so sentences are often truncated and words merged together.

#2: Repeat for emphasis. This practice is probably influenced by a peculiarity of the Malay grammar which reduplicates words to highlight something significant or form plurals.

#3: When in doubt, appropriate. Singaporeans have adopted English words and turned them into something else so don’t be afraid to kapo (steal) them and change what they mean. For example, to whack, when used in Singapore, is to heartily tuck into a meal or to do something with reckless abandon. 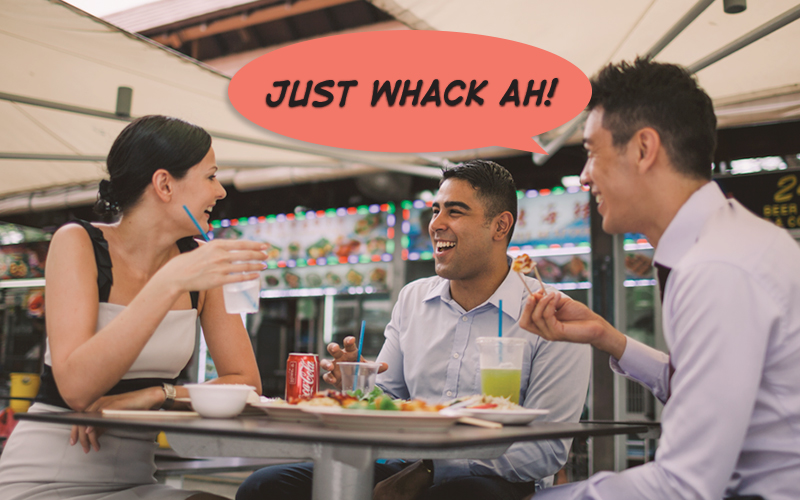 #4: Make it up. Singlish has a range of invented words that don’t mean anything on their own, but dramatically change the tone of what you're saying when affixed to the end of a sentence. The table below illustrates how Singlish suffixes can subtly change meanings.

So you think you’ve got the basics of Singlish down pat? While Singlish may seem simple and straightforward, it’s actually quite nuanced so using it in the right context is important, and will save you from embarrassing moments. Here are a few scenarios with appropriate Singlish words you can use to practise your new-found skills.

#1: At the food court/hawker centre, use…

•   Makan (eat) when you want to invite others along for a meal.

•   Chope (reserve) when you want to let your dining companions know that you have reserved a spot, usually by placing a packet of tissue paper on the table.

•   Tabao (pack to go) when you want to take away your food or leftovers at the hawker centre.

Say: “Uncle/Auntie, can tabao my order?”

•   Shiok (awesome) when you want to express sheer pleasure and approval. Say shiok if you think chilli crab is awesome.

#2: When shopping, some situations you can use singlish is...

•   When you are looking for a bargain or negotiating for a lower price.

Say "Got discount not?" OR "can cheaper?"

•   When you want to know the price of something.

•   When you want people to get out of your way.

Say: "Scuse" (excuse me), or repeat twice for emphasis!

•  When you want directions to your destination.

•   When you are offering your seat to another person. When boarding or alighting the train, say scuse if you want people to move out of your way. Photo credit: <a href="https://www.stb.gov.sg/" target="_blank">Singapore Tourism Board</a>

Once you start using Singlish, you’ll realise it’s a beloved part of life in Singapore that even Singaporeans can’t get enough of. Singlish vocabulary is far from exhaustive so use a phrase or two when you’re in Singapore - it might not help you blend in with the locals, but will definitely earn you some points for trying.